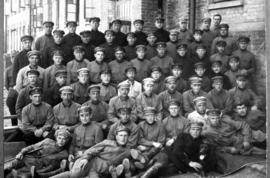 This photo shows a group known as 45th Artillery Regiment under the command of a Penner as part of the Russian (Soviet Union or USSR) armed forces. There are 35 Mennonites on the photo, who all have various positions within the regiment. Include...

The Great Trek is a feature length documentary film of the Mennonite experience and exodus from Russia 1939-1945. It is about World War II and the Russian Mennonites who were part of a migration of people, not only of many individuals, but of enti...

This fonds contains 276 photographs taken and received by Arthur W. Slagel during his 3-year assignment with Mennonite Central Committee from 1920-1923. The collection has photos of the relief work in Russia showing various aspects of the work inc...

This fonds consists of two sets of manuscripts of Isaak's writings. The first manuscript contains his memoirs from his life in exile in Russia, and the second is a history of the Mennonite colonies in Russia. The manuscripts are primarily han...

This series consists of letters from various family and friends, many of whom are writing from Russia. The letters 1971-1995 are written by Anna (Njuta) Martens (nee Reimer).

This series consists of correspondence to and from Elise Enns from her family and friends in Canada, Brazil, Russia, and Germany. Also included is correspondence relating to her sponsorship of her brother Kornelius Toews to come to Canada.

Letters from Regehr and Bargen Clan 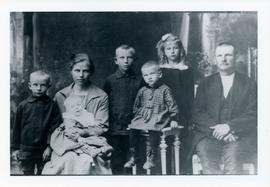 The three story, Association of J. A. Pekker pharmacy building with workers standing in front

A three story pharmacy building. The name on the building is: Association of J. A. Pekker or Pekkerl. Workers are standing in front of the building. Jakob Barkowsky, Rita's grandfather was the son of Michael Barkowsky, who was apparently ...

This photo is of (l-r) me/Njuta, Abram's wife, Peter, Peter's wife, Abram.Shows the group walking through the autumn leaves, perhaps in a park. "January 1989" may indicate printing date.

This photo is of (l-r) Kaethi Enns, Frau Duk ?, me [Njuta] and Liese Enns.Shows interior of home, with a cat and family photos on the wall behind. "January 1989" may indicate printing date. 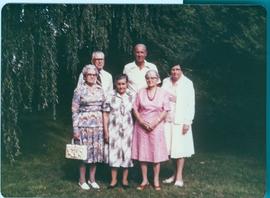 This photo is of a six people. "Lady in the right side is Olga Enns. Olga's brother Henry Enns is standing in the middle."