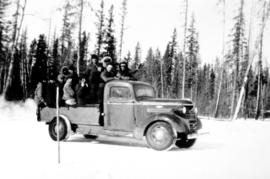 Conscientious Objectors that were sent from Manitoba to Seebe

This photo shows a pickup truck loaded with men in the back. Fifty-six (56) men from Manitoba were sent to Seebe, Alberta in 1942. From there approximately 6 were sent to B.C. They had to do very hard work.The truck is a 1938 Chevrolet.

Department of Mines and Resources Truck 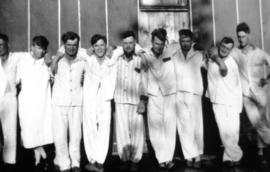 This photo shows a group of conscientious objectors to war at Seebe, Alberta, posing in their pajamas with arms around each other. L-R(?): ? Penner (Alberta), ? Stolfus (Tofield), ? Giesbrecht (Steinbach), ? Wittenberg, ? Schartner and Les Yoder... 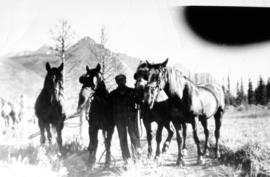 Jake Froese and his team of horses

This photo shows Jake Froese of Hanley, Saskatchewan with a team of four horses at Seebee, Alberta. 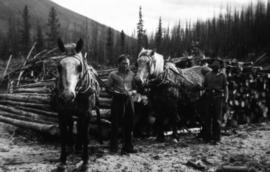 John Schellenberg with his team of horses

This photo shows John Schellenberg standing between the two horses he used in a camp at Seebe, Alberta.

Leaving for Banff to pick up Groceries 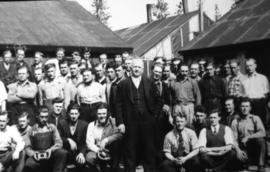 This photo shows over 40 men posing for a photo with Rev. Reimer from Steinbach, Manitoba (centre, front). George Harder (Niagara-on-the-Lake) is the man in the front row wearing the sleeve-less sweater (vest). 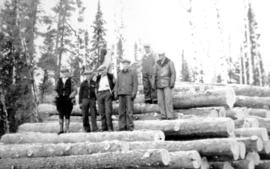 This photo shows a group of men standing on a pile of logs which are destined to become mine props. Two of the men are Schartner (Carl?) and Les Yoder.