This photo shows several people on horses or in buggies at the Peter Isaaks in village #1, Sagradovka. 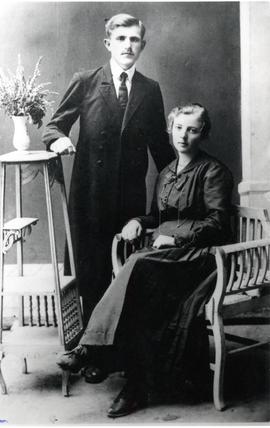 This is a photo of David Lammert and his wife Lena, born Dyck, Sagradowka. [HR 165] 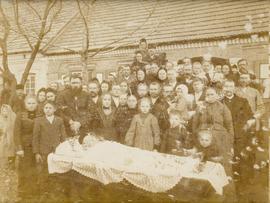 This is a photo of approx. 53 people standing around the open coffin of Elisabeth Heidebrecht (1841-1902). She was the daughter of Abraham and Justina Toews, Furstenwerder, Molotschna. They are outside with bare trees and a house behind them. [Loo... 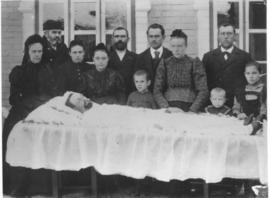 This is a photo of Peter Isaak from Sagradowka. After an accident he was operated on in the Muntauer Hospital, Molotschna, but he died. L-r.: His aunt Mrs. Wall; Korn. Wall; Mrs Klassen; Mrs. Giesbrecht; H. Klassen; son Peter Isaak; W. Loewen; his... 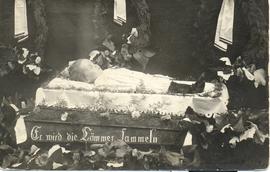 This is a photo of a little girl lying in a coffin with flowers around it. She is the daughter of Johann and Maria (Wiebe-Isaak) Janzen, Friedensfeld No. 3, Zagradovka, a first cousin to Dr. Henry D. Wiebe (1917-1986). 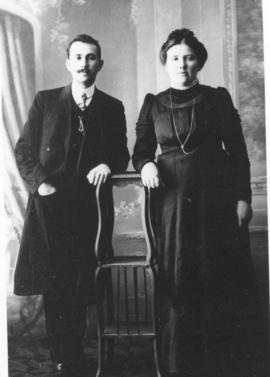 This is a photo of Gerhard and Anna Wiens, Sagradowka. Wiens was a teacher and died in the twenties. His wife and her children had to go through great difficulties. [HR 251] 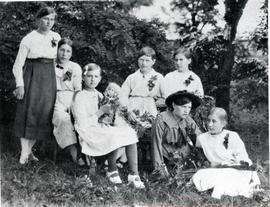 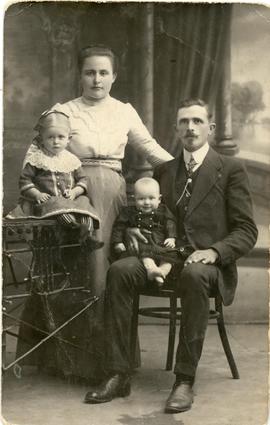 This is a photo of Jakob Iand Maria (Wiebe) Isaak and their two children, Jakob Isaak and Maria Isaak. They are from Rosenort.