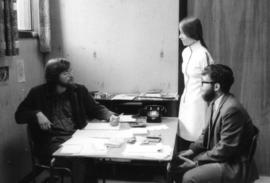 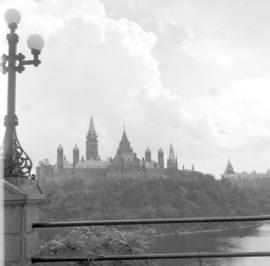 Negatives only (2). Parliament Hill in Ottawa with the Parliament Buildings in the bkgd.

This photo is of a choir singing at Vision 2000. 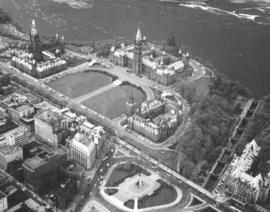 Negative also. Used in the CM 9-38-5 with art. on the first Mennonite congregation in Ottawa, located 4 miles from downtown Ottawa. Rev. William Dick as installed as their pastor. Smaller copy of photo (10x8) also.

This photo is of Alan Andrews speaking at Vision 2000. 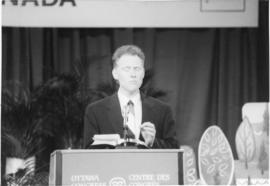 This photo is of André Bourque speaking at Vision 2000.

At the negotiating table.

This photo is of (l-r) chief Solomon Sanderson (Saskatchewan), leader of the Dene nation George Erasmus (N.W.T.), and national chief of the Assembly of First Nations Dr. David Ahenakew sitting together at a negotiating table at the 1983 First Mini...

This photo is a close-up of Bertha and Ken Dyck. 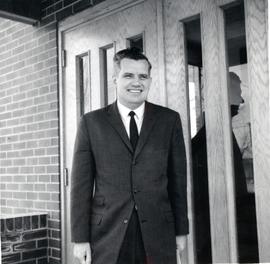 This is a photo of Bill Dick, pastor at one time, standing in front of Ottawa church.

Bob Neufeld and a group of young people.

Bob Neufeld and a group of young people.

Bob Neufeld in his office at the Ottawa Mennonite

This photo is of Brian Stiller speaking at Vision 2000. 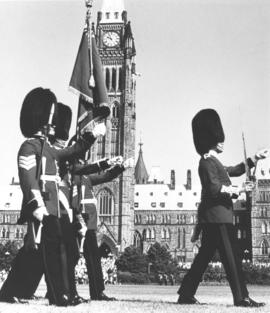 Canadian Mounties march in front of the

Canadian Mounties march in front of the Parliament buildings in Ottawa. The Peace tower is in the background. Not found in CM.