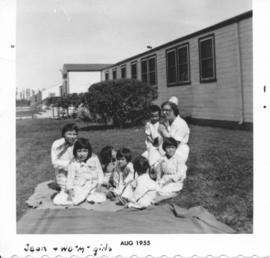 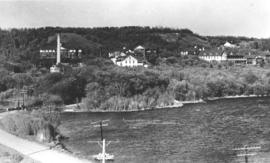 All the buildings of the Manitoba Sanitorium at Ninette, Manitoba

Two post card photos (professionally done) of all the buildings of the Man. Sanitorium, on the hillside, surrounded by trees & in one photo with a lake (Pelican Lake?) in the foreground. There was an MCC VS unit working here. 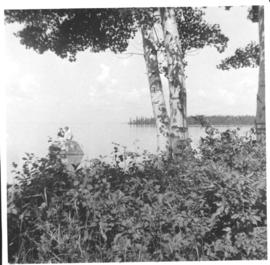 Birches on the shores of Clearwater Lake 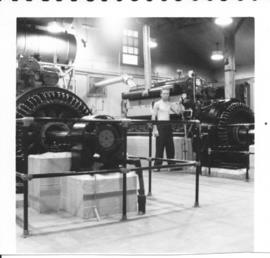 Jacob Redekop at work in the sanatorium power house

Note on back: "Jacob Redekop at work in the power house," at the Clearwater Lake Sanatorium. 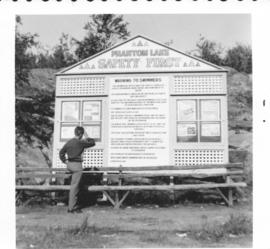 Jacob Redekop, his back to the camera, reads a sign board about Phantom Lake; the volunteers from the Clearwater Lake Sanatorium were on an all-day outing to Flin Flon, Man. 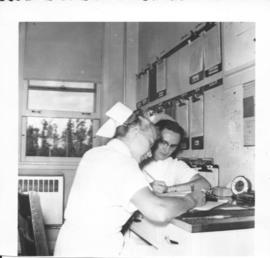 Marion Landis and Vera Snyder at the nurses station

Marion Landis (left) and Vera Snyder (right) writing up patient chart at the nurses station at the Clearwater Lake Sanatorium. 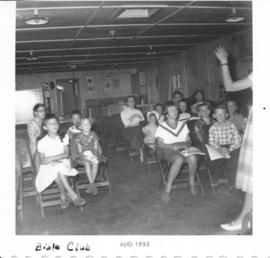 Dated Aug. 1955. Marion Landis (seen partly at right) leads the singing with non-native children at the Bible Club which met every Wed. night. Several adults (other teachers?) sit behind the children.

Members of the Ninette VS group at recreation

Two photos of members of the Ninette VS group engaged in recreation activities. 1)Young woman in her nurses' uniform photographs flowers. 2)One young woman carries the other the other on her shoulders.