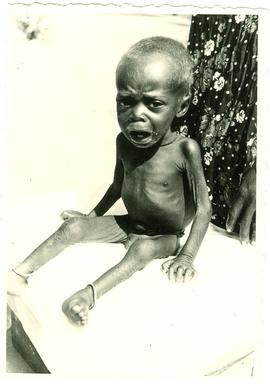 This photograph shows a starving African child whose mother died of tuberculosis.

This picture shows a village school on an African Mennonite Brethren mission field. 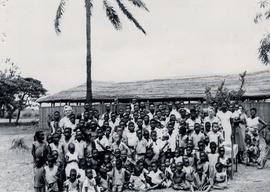 This photograph shows a congregation with the church building in the background. Missionary Susie Brucks is at left. 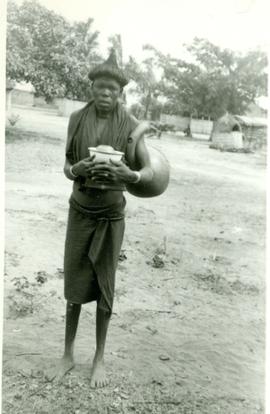 This photograph shows an African woman with a bowl of food. The back of the photo reads "A heathen woman"

At the MBMS booth.

This photo is of (l-r) Arnie Priebe, Valerie Rempel, and Shirley and Ike Bergen standing at the MBMS booth at Urbana.

This item shows a government rest bungalow where missionaries in India attended conferences. 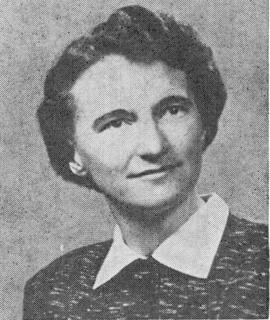 This is a portrait of Daisy Martens. She was ordained on 15 June 1958 for missionary service in Congo. She was an educator, serving in Congo until 1964. See story or ordination in Christian Leader, 23 September 1958, p. 9.

This is a picture of a photograph of Daniel F. and Tina Bergthold, first missionaries to India, sent by the Dalmeny Mennonite Brethren Church. See NP29-1-3. Created by CMBS for Andreas Schroeder, 1990.

This item shows David Nightingale, missionary for the German office of HCJB Ecuador, preparing a message.

This is a photo of Don Loewen who served as assistant secretary for communications and media with MB Missions/Services from 1984 to 1989.

This is a photo of Don Loewen who served as assistant secretary for communications and media with MB Missions/Services from 1984 to 1989. 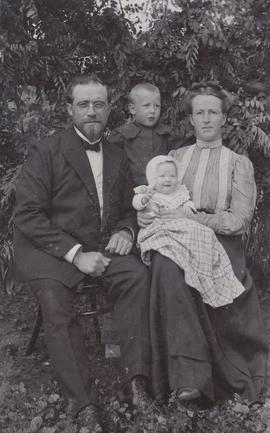 This item is a family picture of Frank J. and Agnes Wiens, and their two children, missionaries to China between 1927 and 1940.

This photo is of Fred Epp leading a seminar concerning Mennonite Brethren Missions and Services at Urbana.