Item 6 - Kroeker and another man at Chapel of the Holy Cross, Sedona, Ariz 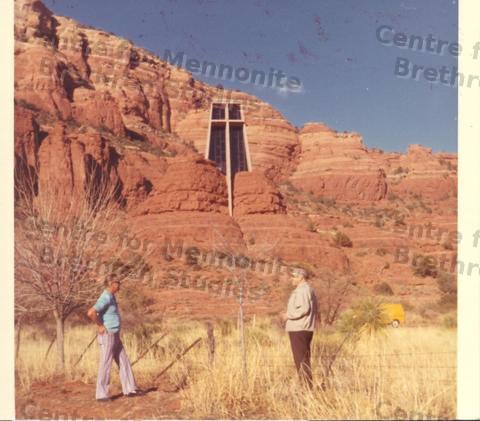 Kroeker and another man at Chapel of the Holy Cross, Sedona, Ariz

Abram Arthur Kroeker, Christain educator and businessman, was born on December 6, 1892 in Winkler, Manitoba. He was one of twelve children born to Abram and Helene (nee Wiens) Kroeker, only six of which survived. At the age of 14 his father died and although his mother remarried Peter Dyck who became his stepfather, it was his older brother Jacob who became his role model. He was baptized on June 14, 1908 and became a member of the Winkler Mennonite Brethren Church. On July 19, 1914 he married Elizabeth Nickel (1894-1981) in Hepburn, Saskatchewan. Their marriage produced nine children. From 1920 to 1922 he attended the Bible School of Los Angeles (BIOLA). Kroeker was involved in basically two activities throughout his life: agriculture and church work, largely the educational branch of the church. Kroeker began farming on his own in 1928, and was an innovator from the beginning, always on the cutting edge of technology. He was chairman of the Canadian Vegetable Producers Association for 30 years. He was inducted into the Canadian Agriculture Hall of Fame in summer 1990. In the area of church work he was one of the original founders of the Winkler Bible Institute in 1926, was a member of the Winkler board from its inception and taught Sunday School education there from 1929-1944. He founded Camp Arnes, buying the land in 1936. The camp began functioning in 1949. Kroeker was ordained in the Winkler Mennonite Brethren Church in 1941. He aggressively promoted Sunday School work, especially the graded teaching principle, in the Mennonite Brethren Church in Canada and in the United States, and was largely responsible for the progress in teacher training and in the adoption of graded lessons in Canada. He was chairman of the Sunday School Committee of the Canadian Mennonite Brethren Conference from its formation in 1933 to 1957. Kroeker was also the secretary of the Manitoba Mennonite Brethren Conference for some time. Abram A. Kroeker died in Winnipeg on February 5, 1981.

This is a photo of A.A. Kroeker and another man at Chapel of the Holy Cross