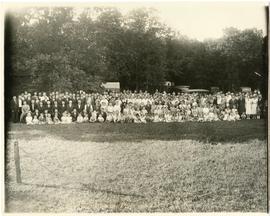 John P. Dyck was born on October 19th 1901 in the village of Schosztak to Peter J. Dyck (1878-1947) and his wife Anna Klassen . At the age of three his mother passed away and his father was re-married to Susie Lietz (1884-1959). John P. Dyck went to school in Novo-Petrowka, the village of Ladekopp in the Molotschna Colony, Schönfeld, and Neu-Halbstadt for high school. In 1918 he went to the Kommerzschule in Halbstadt. Four years later he began his teaching career in Nowo-Petrowka. He taught there until his family decided to immigrate to Canada in June of 1924. They arrived in Rosthern Saskatchewan on July 21, 1924. The following year they moved to Manitoba where they lived in Dominion City until 1928 when they moved to Starbuck.

Following a year of studies at the Mennonitische Lehreranstalt in Gretna, taking his grade eleven in Dominion City, and attending the Normal School in Winnipeg, he began teaching in Plum Coulee. On October 26, 1930 he was married to Agnes Braeul. They were blessed with five children.

After teaching in several different areas of Manitoba, John P. Dyck and his family moved to Springstein where they farmed. During this time he also taught at several Hutterite Colonies. At the time of his retirement in 1970 he had been a teacher for 40 years. In addition to being a farmer and teacher, John P. Dyck was quite involved in the Church and was also an avid historian. In 1986 he and his wife moved from Springstein to the Bethel Place in Winnipeg where he lived until his death on February 4, 1990.

This series includes a few items from Russia collected by J.P. Dyck such as a pre-1917 collection of postcards, letters, several songbooks, inheritance distribution contract and a diary of Franz P. Toews from 1901-1915. The series also contains J.P. Dyck's notes and files related to Mennonite history which include insights on books he read, lesson outlines for church and Mennonite history presented at Springstein Mennonite Church, excerpts from his father's Tagebuch (diary) which J.P. Dyck edited and published, several maps and correspondence with James Urry. Other files pertain to his interests in and / or his involvement with organizations and events such as Jugendvereine (Youth Endeavour Meetings), North Kildonan Funeral Aid Society, Senior Citizen's Camp, Manitoba Mennonite Historical Society, Christian Investors in Education, Gesellschaft für Deutsche Kulturbeziehungen, Manitoba Mosaic Congress, Hutterites and Germantown Mennonite Church. Photos relate to Russia 1896-1898 and to MCI (Gretna, Manitoba) around 1930.