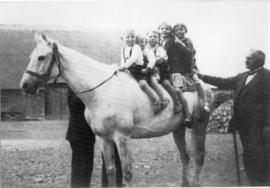 This is a photo of Jacob Friesen (1877-1945), pastor of the Elbing-Ellerwald congregation from 1904 on, helping children riding a horse. Friesen died in a refugee camp in Denmark. Photo taken in 1933 at Friesen's estate at Puppendork near Alt... 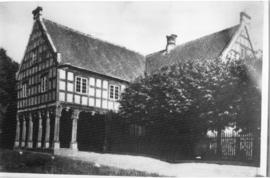 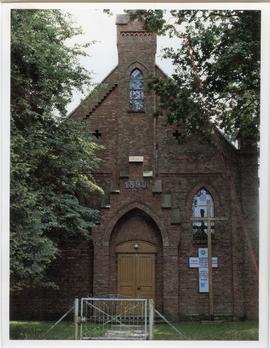 This is a photo of a former Mennonite church in Rozgart (once Preussisch Rosengart) on the lowlands near Elblag (Elbing). This building is made of red brick and two crosses are in the front right. The date 1890 appears above the door, and there is... 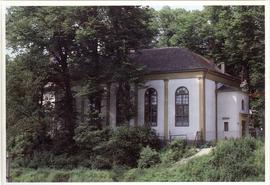 This is a photo of the former United Flemish and Frisian Mennonite church in Gdansk (Danzig). A Pentecostal congregation worships there at present. The building has a white exterior and tall windows. There are many tall trees around the church. 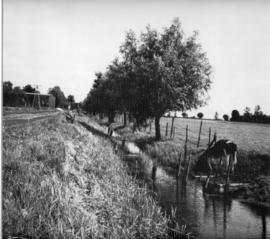 A canal in the Werder

This is a photo of a canal full of water running parallel to tall trees and a fence. There is a cow near the canal in the foreground and buildings in the background. Prussian Mennonites dug these canals by hand. 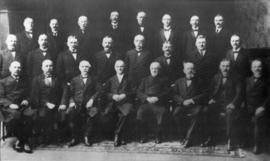 Ministers of the Thiensdorf congregation 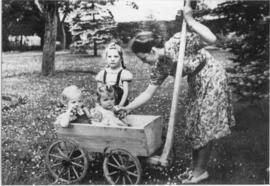 Garden of Erich and Helena Friesen

This is a photo of three children (two in a wooden wagon) and a woman in a garden with tall trees in the background. The Friesen's garden was in Ellerwald. 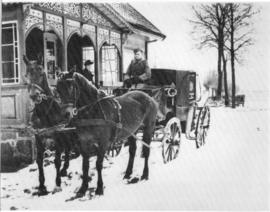 A carriage ready to go

This is a photo of a carriage ready to go at the Friesen's residence. Erich Friesen guides the horses while sitting on the carriage which is in front of the house with a woman waiting on the front steps. There is a child looking out of the wi... 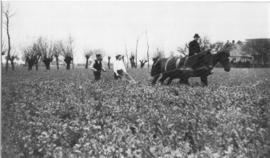 This is a photo of one man riding one of two horses and two men operating ploughs being pulled by the horses. There is a small house in the background and trees that border the field. This field is in the vicinity of Reimersdorf.