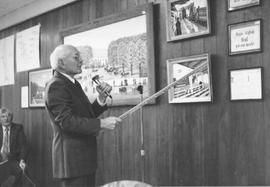 Artist Henry Pauls giving a talk on his paintings

Artist Henry Pauls giving a talk on his paintings in the Conrad Grebel College dining hall at a special recognition dinner in October 1983. 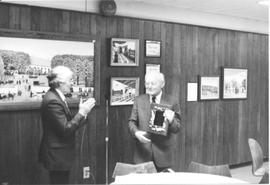 Henry Pauls (right) with Ralph Lebold at a celebration of Pauls' paintings in the dining hall at Conrad Grebel. Paintings donated to the College by Pauls hang in the background. 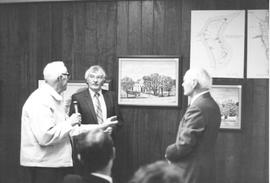 Henry Pauls and his paintings

Ralph Lebold and Henry Pauls listen as another man speaks at a presentation of Pauls' paintings. Several paintings hang on the wall. 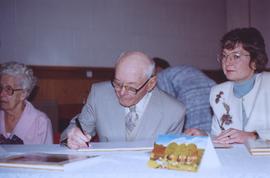 Henry Pauls signing a copy of his book "A Sunday afternoon" during the book launch at Conrad Grebel College. 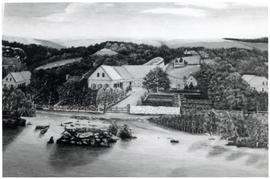 This is a photo of a reproduction of the painting by Henry Pauls of their homestead on the island of Chortitza. (His father was Bernhard Pauls (1877-1963). It was formerly the home of deputy Jakob Hoeppner who negotiated with the Russia governmen...

The original binder (scrapbook) consisted of photographs and other annotations about life in Russia. There are also copies of what Henry Pauls wrote about certain paintings [Photocopied Dec. 2000]