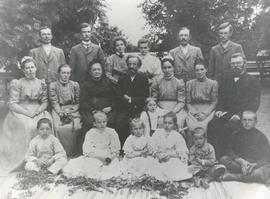 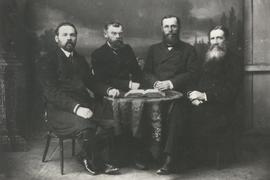 This photo is of four Mennonite Brethren ministers meeting in the Kuban. The men are seated at a small round table. and are wearing dark suits, white shirts, and dark ties. From left to right, they are Peter Koehn of Waldheim, Molotschna; Kornelius Wiens of Woldemfuerst, Kuban Colony; Jacob Reimer of Rueckenau, Molotschna; and Johann Fast of Alexanderfeld, Kuban Colony. 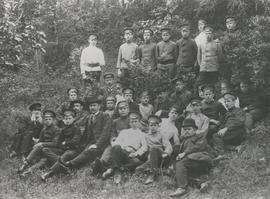 This photo is of a group of unidentified male high school students and their teachers at the Chortiza Secondary School in Russia. There are 25 students and 7 teachers. Peter Johann Penner is the teacher with long white sideburns on the far left of the photo. Abram Abram Neufeld was the principal of the school. He is the teacher, third from the left, in the first row. The students are all wearing caps. Some of the teachers are wearing hats, the others are wearing caps. The photo is taken outside in front of trees and shrubbery. 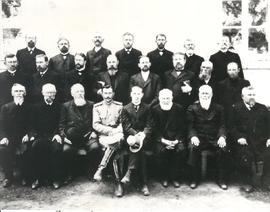 This photo is of 22 Mennonite Brethren leaders posing for a photo at the Annual Convention of the United Christian Anabaptist Mennonite Brethren Church in Tiege, Sagradovka held May 14 -15, 1910. Posing with the delegates is S.D. Bondar, Minister of the Interior. He is fourth from the left in the first row. Third from the left in the first row is Wilhelm Dyck of Millerova. For a complete list of the delegates at this conference see pages 66 & 67 of "Moving Beyond Secession" by Abe J. Dueck. For original photo see oversized photos NP003-01-07. 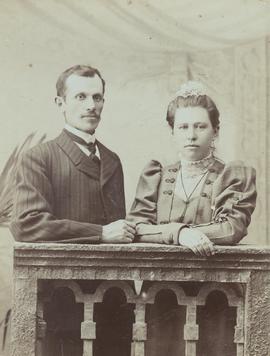 This photo is of Cornelius Reimer and his wife Liese. They are standing behind a stone railing, on which they are leaning. Cornelius Reimer is wearing a suit and tie. His wife, Liese, is wearing a light-cloured dress with a white inset and stand-up collar. On her head is a small crocheted cap. The photo was taken in Welikoknjaschesk, Kuban, Russia. 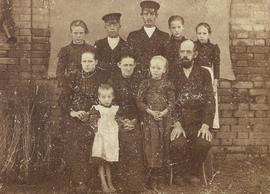 This photo is of an unidentified family in Russia. The photo is taken outside in front of a brick wall.