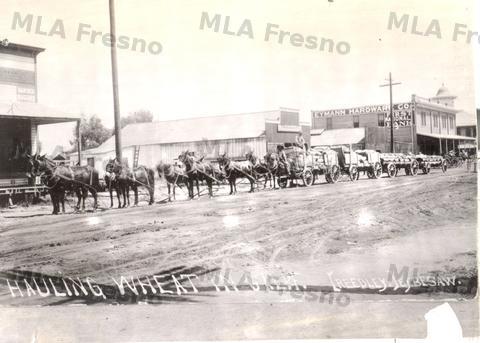 George A. Besaw was born on March 2, 1880, to French Canadian parents Oliver F. & Melvina Besaw, who settled in Deer Creek, Wisconsin. He started his own photography business in Clintonville, Wisconsin, and later was a partner with Edwin B. Anderson in the Western Card Company located in Reedley, California. In May of 1911 Besaw sold out to Edward H. Mitchell of San Francisco. He died in Laguna Beach, Orange, California, on March 2, 1970

Four wagons loaded with wheat pulled by a team of nine horses on street in Reedley, California. The Eymann Hardware Store is visible in the background.