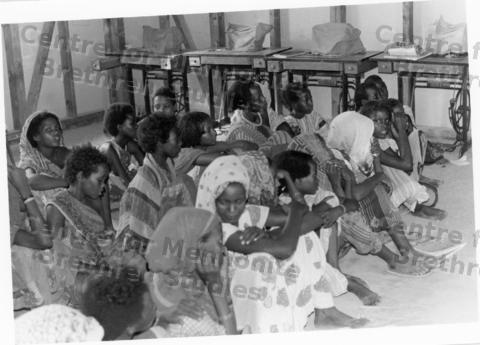 In 1920, civil war, famine and disease swept through Ukraine (then known as South Russia) in the chaos that followed the Russian Revolution. Mennonites in Ukraine, who numbered about 75,000, made a plea for aid to their brothers and sisters in faith in Western Europe, the United States and Canada. They sent four men (Benjamin H. Unruh, A. A. Friesen, K. H. Warkentin, and John Esau) to Mennonite communities in the United States to ask for help.
On July 27-28, 1920, representatives from several Mennonite Relief Commissions met at Prairie Street Mennonite Church in Elkhart, Ind., to decide on a course of action. The result was a provisional organization, to be called Mennonite Central Committee, whose purpose was to unite all Mennonite relief organizations and church conferences in the United States and Canada that were interested in responding to the needs in Ukraine. This Central Committee held its first official meeting September 27, 1920, in Chicago, Ill.
Among its first actions, MCC decided to send three men to Ukraine to investigate and begin relief work. They were Orie O. Miller, of Akron, Pa., who would lead the group; Arthur Slagel, of Flanagan, Ill.; and Clayton Kratz, of Perkasie, Pa. After 25 days, they reached Constantinople, a gateway to Ukraine. Slagel stayed in Constantinople, and Kratz and Miller went on to visit devastated Mennonite villages in Ukraine and meet with Mennonite leaders and relief workers. Miller soon returned to Constantinople for supplies, but Kratz stayed to work. Shortly afterward, the civil war was won by the Communists, as the Red Army defeated the White Army and took control of Ukraine. Kratz disappeared and is believed to have been killed at the end of a war that claimed more than 9 million lives. Today, MCC remembers Clayton Kratz as the first MCC worker to give his life in service to others.
From the fall of 1920 to the summer of 1922, MCC operated shelters for Mennonites and other refugees in Constantinople. After repeated attempts to gain access to Ukraine to deliver humanitarian aid, MCC was able to set up feeding kitchens in Mennonite areas in the spring of 1922. While these kitchens served many Mennonites, they served non-Mennonites as well. Those who received food and other aid were chosen on the basis of need. From 1922 to 1923, MCC provided survival rations to 75,000 people, 60,000 of whom were Mennonites. MCC also provided 50 tractors and 200 horses for Ukrainian Mennonite farmers.
In the mid-1920s, MCC concluded its work in Ukraine as the famine subsided. By the end of its relief efforts, MCC had received and used nearly $1.3 million in funds, clothing and food from Mennonites in the United States and Canada. There were still needs, however, and during the 1930s, MCC helped about 2,000 Ukrainian Mennonite refugees resettle in Paraguay. As part of this effort, MCC was legally incorporated in 1937 in Akron, Pa., where its U.S. national office is still located today.
Since World War II, MCC has worked with refugees from conflicts all over the world and has branched out into many other areas of service that reflect Anabaptist faith. Among these was the Teachers Abroad Program (TAP) in which more than 650 teachers served in a dozen Sub-Saharan African countries from 1962 through the mid-1980s.
In 1963, MCC was incorporated in Winnipeg, Manitoba, as MCC Canada. Today, management of the international work is shared by MCC Canada and MCC U.S. MCC also has eight provincial offices in Canada, of which five are separately incorporated and three are nationally operated, plus four separately incorporated regional offices in the U.S. In addition, there are advocacy offices in New York, Ottawa and Washington, DC. Each year, thousands of supporters of MCC raise more than $35 million to support its international and domestic work, volunteering and shopping at 102 MCC thrift shops, organizing and attending 42 MCC relief sales and making financial and material contributions. Among other efforts, supporters assemble hygiene, infant care, relief, and school kits; donate basic supplies and can hundreds of thousands of pounds of meat for people struggling with war, poverty or natural disasters. These items, which MCC ships from the United States and Canada, total more than $4 million in value each year.

All monetary figures are in U.S. dollars and have not been adjusted for inflation.
Current numbers are based on 2016 figures, if available: of 2015 figures, if not.
Tim Shenk, A Brief History of MCC, January 2007. Frank Peachey, revision and update, September 2016

This photo is of women refugees in Somalian camps. They are meeting together to discuss common problems and attend classes on nutrition, sewing, simple math and literacy.