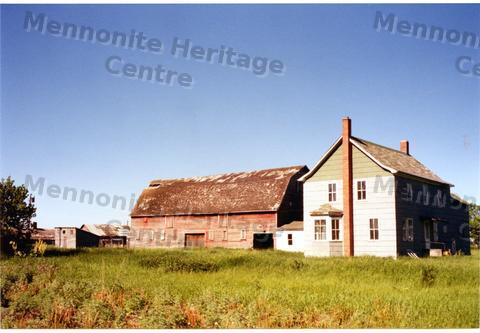 Peter B. Paetkau was born 29 March 1940 to Abram Paetkau and Lena Schmidt in the Sperling area, east of Carman, Manitoba. He joined the Lowe Farm Bergthaler Mennonite Church in his early 20s and farmed with his father. In 1967 he married Mary Anne Dyck and they had five children between 1969 and 1977. In 1988 the couple separated and Peter moved to Winnipeg where he opened a small gift shop on Pembina Highway called "Nice Things and Gifts." The business did not exist very long.
Peter was an active writer, reporter and recorder. His favourite topics were Mennonite, Canadian, Manitoba and Ukrainian histories and poetry. He attended my public events with his tape recorder in hand, producing a permanent record of the event. Between 1977 and 1984 he wrote 28 articles for the Mennonite Mirror, three for Der Bote and eight for the Mennnoite Historian. Peter B. Paetkau died unexpectedly in Winnipeg on 18 August 2011 and was buried in Lowe Farm, Manitoba.

In this photo a house in fairly good condition sits next to a faded red barn and other buildings of the same age under a blue sky in a field. This was once the home of David Schellenberg once part of the village of Neuanlage, one mile north of Gretna, Manitoba on highway #14.