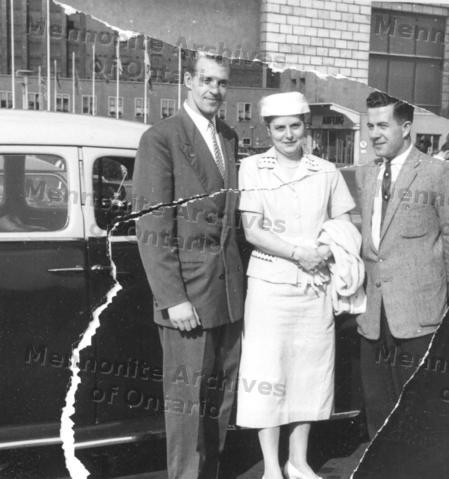 No. 20 in a 2nd set of numbered photos from a tour of Berlin following the 6th Mennonite World Conference at Karlsruhe, Germany in 1957. Used in the CM 5-37-7. Two Paxmen from Canada, Herb Wiebe, West Abbotsford, B.C. (left?) and Art Driediger, Leamington, Ont., who are performing wonderful service among the refugees in Berlin, stand in front of the Tempelhof airport pose with Miss Ursel Foertsch who is head of the refugee work for the Dept. of Social Affairs. She reported that 12,000 refugees out of the (German) east zone crossed into West Berlin during the month of July. Part of the photo is missing on the right and the top of it belongs to No. 21, see below.