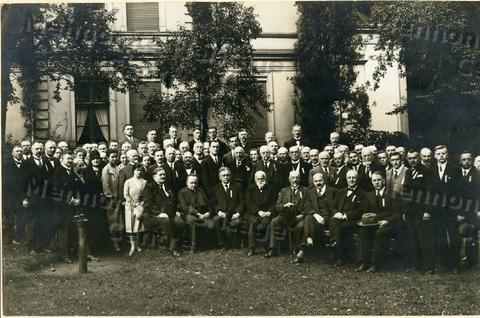 Julius Gottheil was a well-known lithographer in Danzig who began working with daguerreotype photos in 1843. He helped his sons established photo studios -- Richard Theodor Gottheil (1839-1877) in Danzig in 1862, and E. Gottheil in Koenigsberg in 1865. Richard's son, Albert Gottheil (1867-after 1924) took over his father's studio in Danzig in 1895. The Gottheil & Sohn Studio existed until 1945.

This is a photo of approximately 70 people posing in front of a building during the Mennonite World Conference. David Toews is seated 3rd from the left in the front row. Seated far left is Benjamin H. Unruh.