This fonds consists of transcribed and translated letters created by Ed Falk with the help of Peter Wiebe and his son Bruce Wiebe, letters originally written to Dr. Abraham B. Hiebert and his family by family and friends in Russia, United States, and Canada. Some letters are general correspondence, others are letters requesting medical assistance, or invitations to funerals. The letters show the connection of family members in various countries, the importance of doctors, and current events in the Mennonite communities.
Includes footnotes and appendices. 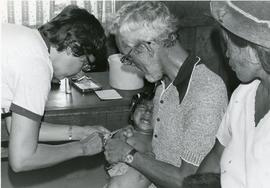 Administering a TB vaccine in Bolivia

This is a photo of Tina Driedger administering TB vaccine while Cliff Amstutz is holding a reluctant child at the nursing post in Villa Imperial, Bolivia. A woman, possibly the mother, is looking on. 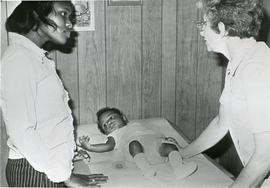 This is a photo of pediatric nurse Alice Drefcheirski (right) with patients of the Teche Action Clinic in Franklin, La. MCC U. S. volunteers also work at the clinic. 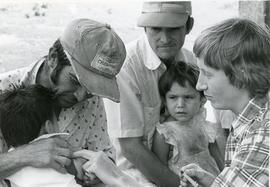 This is a photo of nurse Judy Koop Bietz of Winnipeg, MB giving an injection to a young Bolivian. She is one of the MCCers featured in the new MCC film, "Give Me Your Hand: MCC Today". 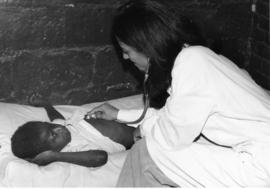 This is a photo of Ali receiving medical care from Dr. Insaf, who volunteers her time for a physical to Broader Horizons, a school for handicapped children, begun by an MCC worker. 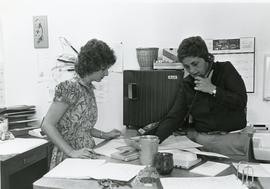 This is a photo of (left to right): MCCer Donna Weaver and her supervisor, Dana Cook, arrange an eye examination, by phone, at a nearby hospital for a patient needing the care of a specialist. 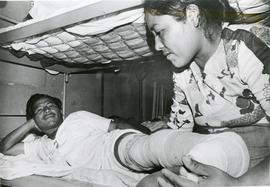 This is a photo of Juan Rizo, Nicaraguan Nazarene pastor, lying on the lower bunk, with his wife, Matilde, holding his leg. MCCer Jim Hershberger visited Rizo in the Jinotega Hospital several days after the bus he was riding on was blown up by a contra mine. 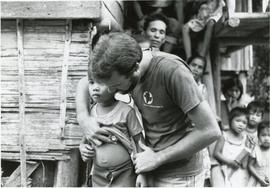 This is a photo of Jim Kurtz, Mennonite Central Committee nurse serving in the Philippines, listening to a child's heart beat outside a home with people looking on. 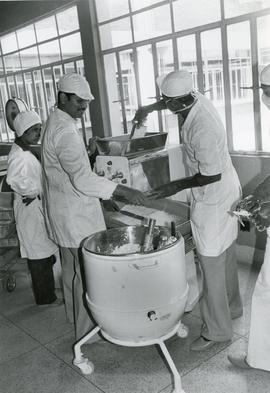 Staff at Gonoshasthaya Pharmaceuticals in Bangladesh

This is a photo of staff at Gonoshasthaya ("People,s Health") Pharmaceuticals in Bangladesh prparing materials for the first production of paracetemol tablets. The non-profit factory is selling basic drugs at 20 to 50 percent lower than those of commercial manufacturers in Bangladesh. 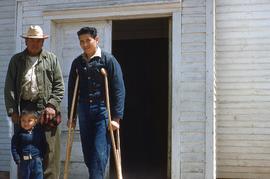 An elderly man, a young man on crutches and a young boy stand in front of building 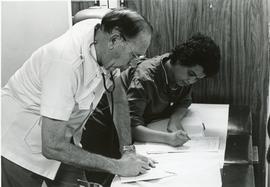 This is a photo of (left to right): Dr. Schaeffer and MCCer Brigette Hudicourt at the HACAD Clinic for Haitians in Miami. Her duties include translating for the doctor, who does not speak Creole. Two other Haitian-American doctors work with the clinic as well. 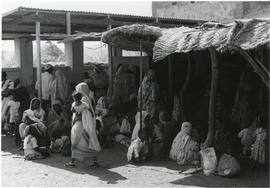 Waiting at a medical clinic

This is a photo of patients waiting outside a clinic for medical care in a refugee camp min Um Sagata, Sudan. The primary health care program in which four MCC health workers are involved focuses on maternal and child health care.

This collection consists of 100 black and white photos depicting Kehler's experience as a conscientious objector during the Second World War, performing alternative service at the Portage la Prairie mental institution. The photos depict Kehler, his friends and staff (male and female), patients, doctors, the hospital grounds and activities undertaken by staff and patients. Most of the photos are identified in the album either on the back or on the adjoining page of notes.
Significant people named include Abe Hildebrandt, Bill Enns, George Harder, Jake Friesen, Gerhard Ens, John Funk, Isaac Doerksen, Dave Dyck, Henry Funk, William Kehler, George Martens, Ed Penner, Darcy Loewen, John Inglis and Dr. Bristow.