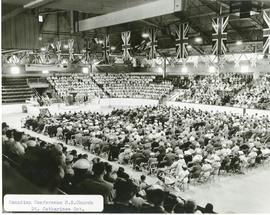 This is a photo of a gathering at the 1954 Canadian Mennonite Brethren Conference held at Virgil, Ontario. The general church services were held in nearby St. Catharines. Attendees are seated in a hockey arena. A large choir in white shirts and blouses sits in the bleachers near the small stage on which a number of people are seated. The photo has been taken from the back of the arena facing the stage. 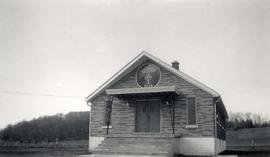 This image is of Peter Hiebert posing for a photo. He was ordained as a minister in the Church of New Jerusalem at Rosenfeld in 1902. Later he was a farmer and a minister at Chaplin, Saskatchewan. 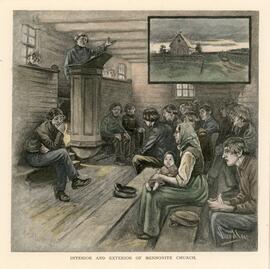 This image is a print created by a wood engraving. It is entitled "Interior and exterior of Mennonite Church." A man stands with his arm outstretched at the pulpit and two people sit on either side of him. Three men sit below the pulpit facing the congregation. A group of men are seated on the right-hand side on benches with no backs. A woman with a small child is seated on the left side with a man behind her. Inset on the top rights a church building in a village setting and a wagon on the road going towards the church. The image has been coloured (hand tinted).

This item consists of a negative of Klaas Peters posing for a photo.
Cropped out of this negative is his wife, Katharina Peters who is seated at a table with Klaas posing for a photo. On the table is a photo of another couple. (See "The Bergthaler Mennonites," p. 46.) Klaas Peters was ordained as a minister in the Church of the New Jerusalem at Rosenfeld in 1902. Later he lived in Didsbury, Alberta and Waldeck, Saskatchewan. [Print is 436:3] 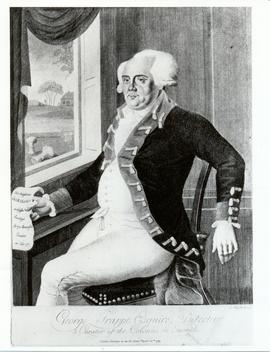 This is a photo of a drawing of George Trappe sitting in a chair beside a window and holding a piece of paper. He was the director and curator of the colonies in Tauride. 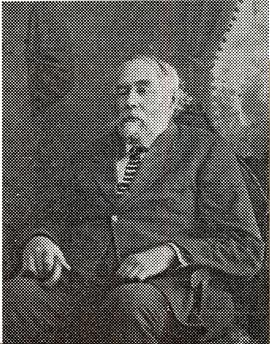 This its a photo of Peter Hiebert posing while sitting in a chair. Peter Hiebert was ordained as minister in church of the New Jerusalem at Rosenfeld, 1902. Later farmer and minister at Chaplin, Saskatchewan. 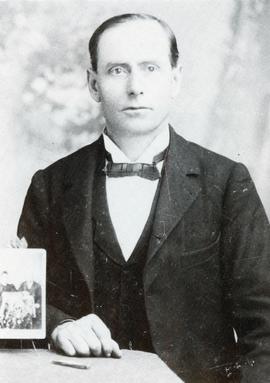 This is a photo of Klaas Peters posing sitting at a table. He was from Edenburg and ordained as a minister in the church of the New Jerusalem at Rosenfeld in 1902. Later he lived in Didsbury, Alberta and Waldeck, Saskatchewan.

This photo shows Ken Reddig and Lawrence Klippenstein in the Mennonite Heritage Centre at the release of "Kuban Settlements" by CMBC Publications. 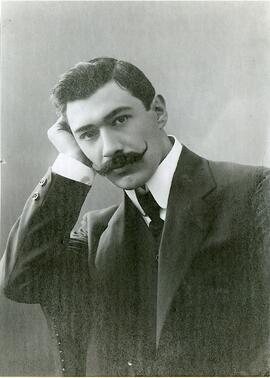 This photo is a portrait of Peter Heese (1878-1947) as a young man. He is wearing a three piece suite, with a white shirt and tie and sitting on a chair. He has a groomed fine moustache and is leaning his head on his right hand posing for the photo. -- Note: this photo is a reproduction.

This collection consists of copies of the photos collected by Cornelius Krause from a Mexican land agent that traveled with Krause and other Mennonite delegates from Manitoba and Saskatchewan who were investigating the possibility of the migration of a group of Mennonites from Canada to Mexico and photos taken by Cornelius Krause himself while investigating Mexico as a possible country to which a group of Manitoba and Saskatchewan Mennonites could move. The photos which Krause took himself show people and places visited on the trip in Mexico (Collection 592). The photos by the land agent (Collection 590) taken before the arrival of the Mennonite delegation and during their visit to Mexico. The photos were taken to encourage the Mennonites to move to Mexico. They show road and railway construction, wide open wild areas, places where there was water, villages, homes, and fields successfully developed by the Old Colony and Sommerfeld Mennonites who had moved to Mexico in 1922.