These photos are known as the Ben Sawatzky collection. 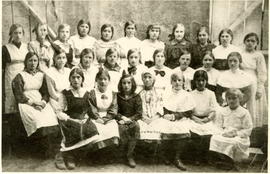 Photographs of various church buildings and institutions in Canada through the 20th century. 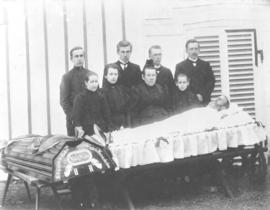 A note on the back of the photograph indicates the fate of the family members: Gerhard died in Siberia, near Tashkent; Isbrand "died in concentration camp, was taken in the Stalin purge of 1937"; Abram migrated to Canada in 1924; John and Anna both died in Kleefeld; Tina and Mariechen died in Russia; Greta married Edwart Metz, and "died in Russia 1960. Her husband died in concentration in Russia. He was taken away during Stalin purge 1937."