This small set of papers focuses primarily on Weirich's Civilian Public Service (CPS) work building flood control structures in Iowa and serving as a smoke jumper. Materials include an album of photographs and documents, collected articles on smoke jumpers, and newsletters and ephemera from Camp 18 (Denison, Iowa) and Camp 103 (Missoula, Montana). Also included are 26 photographs of First Mennonite Church (Middlebury, Indiana) in the 1950s and 1960s. Subjects include members of the church's baseball team circa 1950.

Papers of a Harold Wik, a Mennonite service worker who volunteered with Civilian Public Service, Mennonite Central Committee and missionary to China and Malaya (West Malaysia), and his son Philip Wik.  Documents include correspondence, photographs, two Wik family histories, and a Wik family anthology.  The family histories and anthologies integrate historical family documents or photocopies thereof into the text.

This collection documents Newcomer's experiences in Civilian Public Service camps as a conscientious objector during World War II. Materials include ration books, camp rosters, photographs, miscellaneous correspondence, and a memoir of his experiences.

The collection also documents Newcomer's interest in the history of Mennonites in northern Indiana, specifically the Yellow Creek Mennonite Church. They include photographs, estate sale bills, and photocopied documents related to Yellow Creek members who were conscientious objectors during World War I. 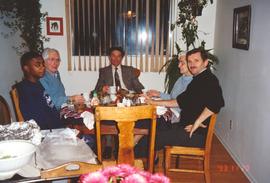 Two Second World War veterans who later became peace activists, Siegfried Bartel and Fred Snyder, met for the first time in November 1993. Bartel had been an officer in the German army and Snyder was an Allied radar mechanic. The two met at dinner at John and Carrie Harder' home after Bartel spoke for a week at Rockway Mennonite Collegiate, sharing his faith journey to Christian pacifism. Left to right: Addae Morgan (who was living with the Harders), Fred Snyder, Siegfried Bartel, Lorraine Snyder (Fred's wife), John Harder.

A set of research materials assembled by Gordon Oyer to write an article on the history Civilian Public Service in Illinois, including CPS Camp #115, Subunit #30.  CPS volunteers at this camp were "guinea pigs" for medical experiments studying the physiological effects of heat and tropical conditions.  Camp #115 was a cooperative agency administered the Mennonites, Brethren, and Friends under the direction of the Office of Scientific Research and Development.  Subunit #30 was administered by Mennonite Central Committee.

Materials in this collection include the diaries of two CPS volunteer participants in these experiments:  Duane Hougham (Methodist) and George Nachtigall (Mennonite Brethren).  Nachtigall's diary is a photocopy of the original.  Also included are letters with CPS volunteers stationed in Illinois, clippings, and a copy of Oyer's article. 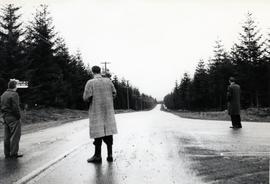 This is a photo of the trees planted during WWII by conscientious objectors north of Campbell River, Vancouver Island. In the foreground, with backs to the camera are (left to right): Jake Wiebe of Black Creek, B.C.; Rudy Regehr of CMBC, Winnipeg; and Frank Dyck of Winnipeg. 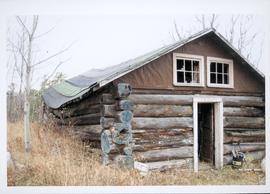 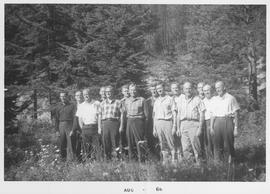 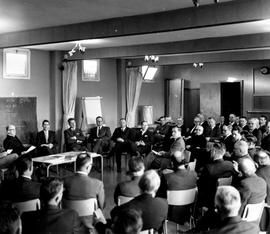 Most of the papers are photocopies from the National Archives and Library of Congress related to Teichroew’s thesis or dissertation (never completed) about Mennonites in World War I. There is some later material also, World War 2 related. 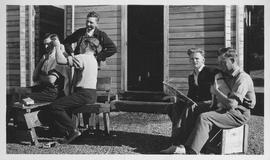 Five men at a Canadian camp for conscientious objectors

5 men at a Canadian camp for Conscientious Objectors (Alternative Service) during WW II. At right 2 sit on some crates, one holding a dog. At left one man receives a haircut, another looks on.
Place not identified, no date given. 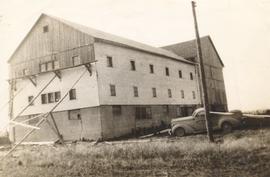 The barn Stanley Sauder worked on