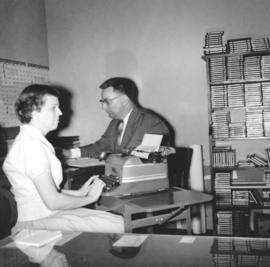 Two photos & negs. of Waldo & Ethel Kaufman in the GCMC offices. Negative #2 was used in the CM 4-32-8, a side view of Ethel typing and Waldo reading. In the unused photo Ethel sits at the typewriter & Waldo holds a tape, both facing the camera. They were in charge of the radio program "Faith and Life." 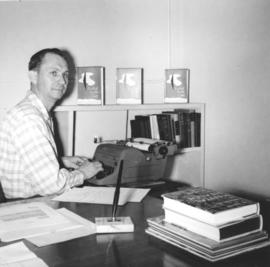 Negative also. Used in CM 4-32-9. Walter Unrau, manager of the Mennonite Publication Office works at his typwriter in the GCMC offices in Newton, Kan. To the right of his head is the recent publication, "Exiled by the Czars." He directed the work of the bookstores located in Newton, Berne and Rosthern. 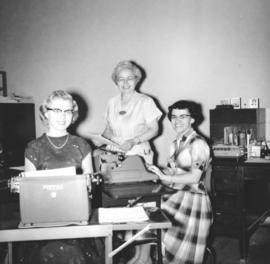 Two photos & neg. for each, #4 (where the 3 women are smiling) was used in CM 4-32-8. In neg. #3 (not used) their expressions are serious as they work. Secretaries Lois Warkentin & Tina Block (seated) do dictation work in the GCMC office. Wihelmina Kuyf stands behind them. Her work was administration in the missions office. See 1998-14.10 for another photo of her. 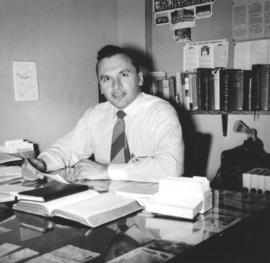 Two photos, neg. for each. Negative # 9 was used in CM 4-32-9 in which Bill Gering, full-time youth missionary of the conference, sits at his desk in the GCMC offices in Newton, Kan. facing the camera. A Youth Office had been established by the Young People's Union of the church. The unused photo shows Gering from the side, typing. 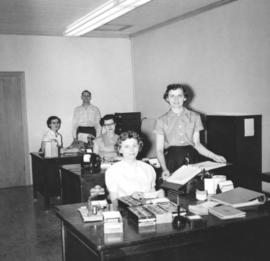 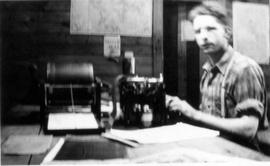 Typing and printing The Northern Beacon

An Alternative Service Worker types copy for The Northern Beacon. A duplication machine sits on the table in front of his typewriter.