The collection consists mostly of photos, both of family and of deaconess and hospital activities and of Bethel College activities. Also included are a few items of personal memorabilia.

A small collection of photographs of Pacific Conference churches and persons, some identified, others not.

Includes a wide variety of correspondence, financial, legal, and family history materials. The focus is more on personal and family life rather than professional, except for some documentation related to his work as pastor of various churches.

The documents in the collection consist almost entirely of minutes, correspondence, and newsletters related to their work with Mennonite Disaster Service. The remainder of the collection is almost entirely composed of slides, including many during World War II of Adolph’s CPS locations and some travel during the war. Others relate to other service work, especially various MDS work trips. 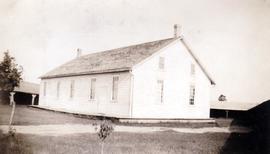 Part I is a manuscript entitled “Gott hört uns nicht mehr”.  This appears to be a first-person, historical novel about Mennonites in the “Gulag” in the Soviet Union in the 1930s.  Previously, this item was cataloged in the MLA's library, accession #17547, acquired in 1972.

Part II is a manuscript entitled “Wenn Gott die Weiche stellt”.  This is another historical novel, about Mennonite refugees from the Soviet Union.  This item was also cataloged in the MLA's library collection, accession #17462, acquired in 1972.

Part III is a collection of source documents and notes entitled “Material zur Geschichte der Mennoniten in Brasilien”.  Most of the material covers the late 1940s and early 1950s.  As one can see, not all of the material is about Brazil.  These papers were at the Mennonite Church USA Archives–Goshen until 2011; the North Newton archives had photocopies.  The arrangement of the material here corresponds as closely as possible to Quiring's own outline for it.  Folder 22 is a manuscript by Johann Sjouke Postma entitled “Fernheim, Fernes Heim?”.  Folders 26-29 are not part of Quiring's outline.  The MLA has 909 individually numbered pages in this section.

Part IV is a rough draft entitled “Witmarsum am Krauel”.  This is a more polished draft rather than a collection of documents as in Part III.  These are arranged according to Quiring's outline.  Folder 45 is not part of Quiring's outline and just contains notes, sources, and bibliography.

Part V is entitled “Material zur Geschichte der Auflösung der Ansiedlung Witmarsum in Santa Catarina”.  This is again a collection of source documents and notes, from the late 1940s and early 1950s.  These items are photographic copies; that is, copies on photographic paper, not xerographic copies.  The present location of the originals [1989] is unknown.  The arrangement is according to Quiring's outline, but Roman numeral XIX from his outline, “Verschiedenes,” is missing. These deteriorating pages have been scanned [2011], in folder archives/ms_139.

Part VI is a draft entitled “Canadische Mennoniten 1875-1975".  The termination date of 1975 seems somewhat strange since the manuscript was acquired by the MLA in 1972 and was cataloged as part of the MLA's library collection, accession #17461.  The manuscript may have been modified since 1972.  This is once again a draft rather than a collection of documents.  These are original materials, not photocopies.  The message of this rather rough draft is a bitter denunciation of contemporary Canadian Mennonitism for being different from the Mennonitism of Quiring's childhood.  The contents bear only a slight resemblance to Quiring's accompanying outline and may not be in original order.

Part VII consists of two folders of miscellaneous drafts of articles by Quiring and several of his writings that had earlier been cataloged in the MLA library holdings.

Records of a bicycle touring ministry sponsored by the Mennonite Board of Missions.  Records are divided into two series: 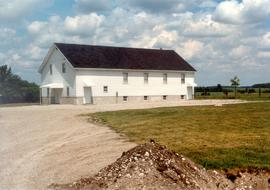