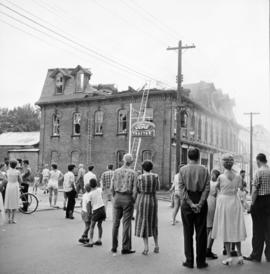 . A crowd standing on the street in New Hamburg, Ontario during a fire 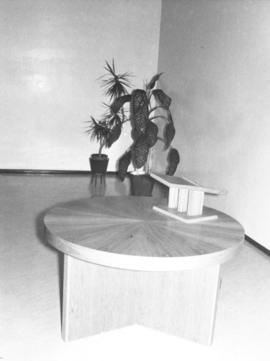 Used in CM 17-48-14 with art. A round communion/pulpit table, designed by V. J. Heinrichs, built by Joachim Unrau. Placed in the Hamilton Mennonitechurch The table represents a certain view about Christ & equality. 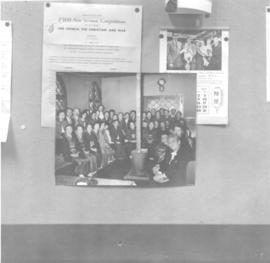 Used in the CM 5-9-4. Christian women of the General Conference Mennonite mission field in Japan gathered for prayer with millions of other Christians around the world for the World Day of Prayer (referred to on the old envelope as Women's Day of Prayer). The photo in the CM is enlarged from the one see here that is posted on a bulletin board. 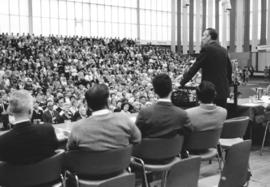 Three photos from the 8th Mennonite World Conference opening ceremonies on Sunday evening July 23, held in the Zuidhal (South Hall?) of the International Congress Centre in Amsterdam and attended by 4,000 people. J. J. J. van Sluijs, president of The Netherlands Mennonite Conference (Algemene Doopsgezinde Societeit), chaired the meeting and is visible in all 3 photos, 2 of which were taken from the back of the stage and show the audience in front of him. The 4 men on stage with him (backs to the camera) are likely members of the Presidium. One photo is taken from the side along the stage, showing Sluiys, the front rows of the audience and the flower arrangements on and in front of the stage. See also 1992-14.4001 and 1992-14.4377. 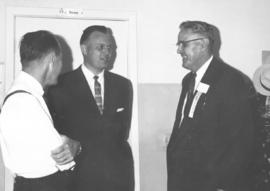 . J. M. Klassen is welcomed by David and Paul Schroeder

Used in CM 11-30-2. J. M. Klassen, exec. sec. of the CMRIC, is welcomed by David Schroeder (back to camera) and Paul Schroeder, chair of CMC (profile shot of him but he is smiling broadly) at the CMC annual conf. in Altona. 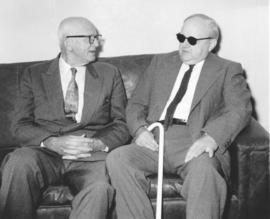 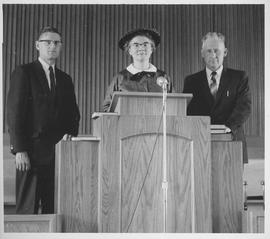 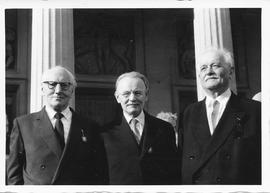 No. 14 the last one in this set of numbered photos from the 6th Mennonite World Conference held in 1957 in Karlsruhe, Germany. Used in CM 5-34-4. German leaders: l-r: Abr. Braun, conference sermon; Emil Haendeges ("ae" is used instead of the German umlaut), retired; Benjamin H. Unruh who delivered the address to the civic leaders at the banquet given by the city, prior to the conference to which 24 Mennonite leaders were invited. See also the group photo in 5-34-1 showing a large number of Canadian and US delegates. See 2010-14.457 for the beginning of this series. 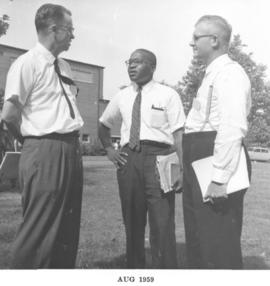 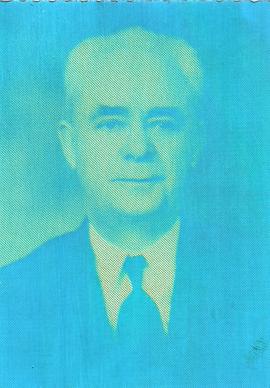 Identified only with "Steinach." 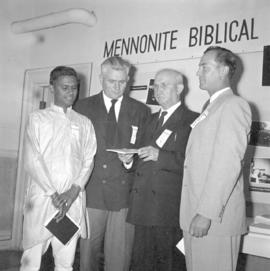 Negatives only, 2. In both negatives, J. J. Thiessen, moderator of the Canadian GC church, & Samuel Stephen, principal of the Mennonite high school in India, stand in front of MBS display panels. In neg. (7E?) a 3rd man is with them, in the other neg. (8?) this same man & an additional one are in the photo with them. The unidentified men might be members of a board. 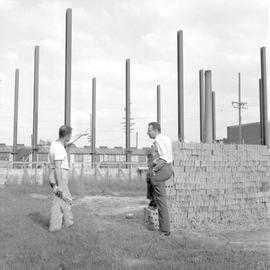 Negative also. Used in the CM 4-25-8 (right). Two Canadian students, Gerhard Reimer and George Unger look at the steel pillars which will support the concrete floors of the arts building being constructed. Dated June 1956. 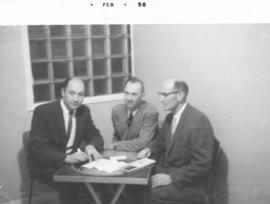 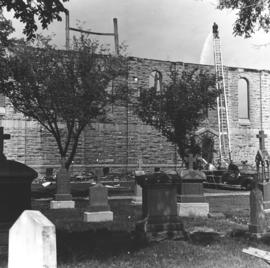 1 wall of the St. Boniface Basilica (& cemetery in front of it), the roof missing, the windows open. A fireman stands at the top of a long ladder above the wall pouring water down on the fire. Enlarged from #1 in 1994-14.2078 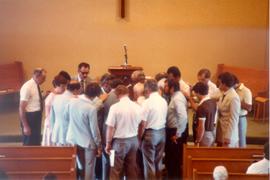 10 photos from David Brubacher installation as

10 photos from David Brubacher installation as Pastor at Poole Mennonite Church, June 1983. Persons are identified on back of photo when known