An old man & his grandson sit in a church in Riga

Used in CM 17-1-3 with art. by Frank C. Peters on his trip to Russia with Peter Dyck & A. Klaupiks. An old man (bearded) & his grandson sit in a church in Riga before the worshippers arrive & the service begins. 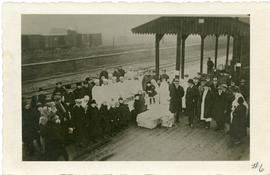 This is a photo of the arrival of the refugees at the Riga train station. Red Cross personnel, dressed in white, are there to assist them. 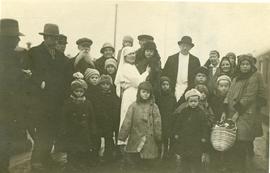 Arrival in Riga at daybreak

This is a photo of the arrival of the refugees in Riga at daybreak. 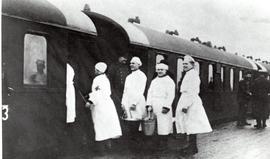 This photo is of Red Cross personnel entering a train car to distribute food to the refugees at Riga. 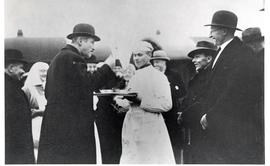 This photo is of the noon meal being tested before it is served among the emigrants at Riga. 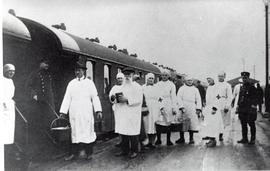 This photo is of Red Cross personnel distributing food to the refugees at Riga. 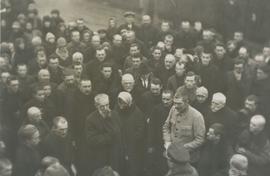 Emigrants arrive at Riga and are welcomed by a representative of the city of Riga. 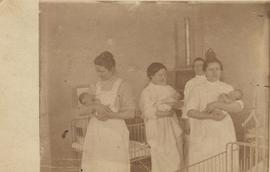 This photo is of four nurses in the maternity ward of a hospital in Riga. Three of the nurses are holding babies. Helen Regehr is at the rear on the right side of the photo. Two baby cribs are visible in the photo. In the right hand corner of the room is a stove with a chimney pipe. 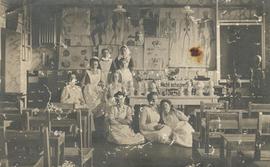 This photo is of 9 women posing for a photo in a medical classroom filled with posters and replicas of human anatomy. In the foreground are chairs and desks. Far left hand side is Helen Regehr. She graduated from this medical school in Riga, Latvia as a registered nurse in 1902 and received a diploma, which is stored in the oversized photo area. 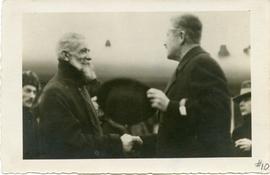 Jacob Janzen and a German official speak in Riga

This is a photo of Jakob Janzen and a German official speaking in Riga. 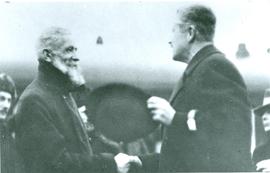 This photo is of Minister Johannes Janzen greeting Dr. Stieve, the German Ambassador to Latvia. 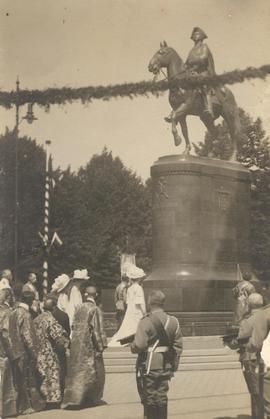 Nicholas II & Alexandra in front of statue of Peter the Great. Riga, Latvia

This photo is of Nicholas II and his wife Alexandra standing in front of a statue of Peter the Great in Riga, Latvia. The czar is wearing a military uniform. His wife is wearing a long white dress with a train and a white hat. A small group of dignitaries is standing in the front of the photo. The czar and his wife are standing at the base of a column which holds the statue of Peter the Great mounted on a horse. 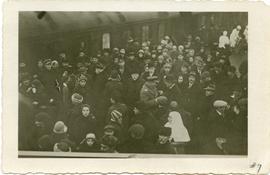 People getting off the train at Riga

This is a photo of a large group of refugees getting off the train at Riga. 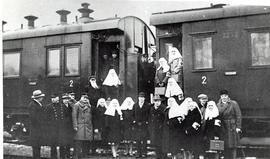 This is a photo of the Red Cross personnel that served immigrants on the German train at Riga. 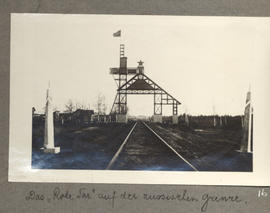 This is a photo of the Red Gate at Riga.