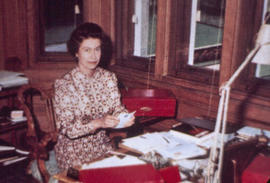 Stock photo of Queen Elizabeth II working at a desk in an office. She is going through the red dispatch boxes sent to her daily by the British government. This photograph is included in the slideshow likely to illustrate the processes of government. 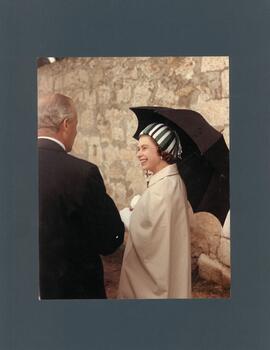 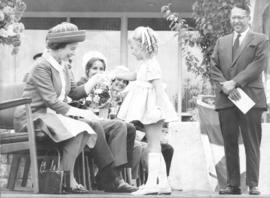 Queen Elizabeth II is receiving a bouquet from Lisa Epp

Used in the CM 18-29-1. Queen Elizabeth II is receiving a bouquet from Lisa Epp in a brief ceremony at the civic building. Mayor L.A. Barkman is standing at right. Queen Elizabeth was the first monarch to visit Steinbach. 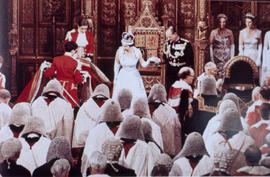 Stock photo of Queen Elizabeth II opening the British Parliament. This photograph is included in the slideshow likely to illustrate the processes of government. 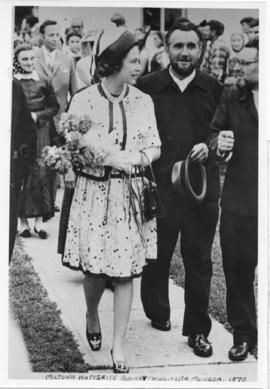 This photo shows Queen Elizabeth II walking down a sidewalk escorted by Hutterite minister Mike Waldner (left) and Jacob Kleinsasser, with Mike's wife Elizabeth on the sidewalk in the background (far left) and behind her is James Richardson. 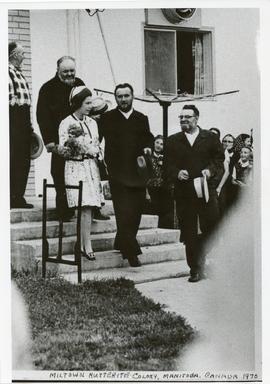 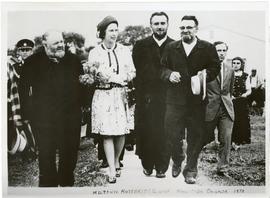 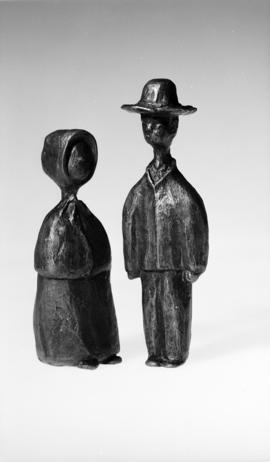 Waterloo Region gift to Queen Elizabeth. June 28, 1973. This photo was published in "Mennonite Reporter," July 9, 1973, with the following caption: "These bronze sculptures of an Old Order man and woman were presented to Her Majesty, Queen Elizabeth, on her June 28 visit to the Waterloo-Kitchener area. Presentation was made by Jack Young, Waterloo Region chairman. The sculptures were done by Waterloo artist Renie Ellis. Mennonites constitute about 10 percent of what before regional government was Waterloo County." Hunsberger photo 92-20