The Access Project was a program of community education in cooperation with the Victim-Offender Reconciliation Project (VORP) of Mennonite Central Committee Ontario and the Ontario Ministry of Corrections. The program ran from 1977-1980. In 1977, the Access Project created two educational slide shows, one on "The Law, Crime and the Administration of Justice" and another on "Juvenile Delinquency." Slides were also taken for use in displays and for a television series on "Crime and the Community."
The slides in this file are assumed to have been created for the above purposes. The slides came to the Archives in no particular order, and may have been used for more than one presentation. No scripts for the slideshows have been located.

This file consists of photographs from Lewis Reesor's time at the Montreal River Alternative Service Work Camp in northern Ontario. Reesor was in Group 4, which served from 25 Nov 1941-24 Mar 1942. This group overlapped with Group 5, which served from 9 Dec 1941-11 Jul 1942.

Colour slides taken in 1979 by Carl Zehr of four events: the Mennonite Relief Sale in New Hamburg, an auction at the Waterloo stockyards, a visit to the Wellesley Brand Apple Products processing plant, and a barn raising by Mennonite Disaster Service in Woodstock, Ontario.

This file contains photographs of ancestors and descendants of Christian S. Bender and Annie (Kennel) Bender. Items 19-30 are from a photograph album compiled by Joseph Kennel, probably after his return to Canada, containing largely unidentified photographs of Kennel relatives from France, Germany and Algeria. 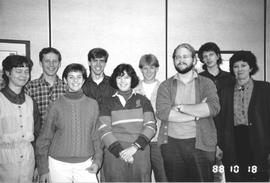 The album contains photographs of Cressman's time as a conscientious objector in Alternative Service in British Columbia from 1942-1943. Although primarily based at the Goldstream (Langford) camp, Cressman and the other COs sometimes worked in the local community or in other CO camps on Vancouver Island. Most of the men in the photographs are fellow COs from Ontario, along with a few staff of the British Columbia Forestry Service.