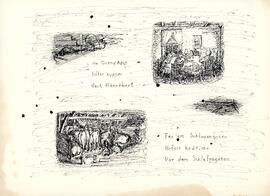 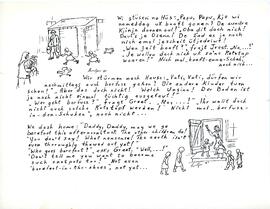 Sketches of children playing barefoot outside their houses.
"We dash home: "Daddy, Daddy, may we go barefoot this afternoon (too)? The other children do!" "You don't say! What nonsense! The earth isn't even thoroughly thawed out yet!" "Who goes barefoot?" asks Greet. "Well...!" "Don't tell me you want to become such snotpots too!" Not even "barefoot-in-the-shoes", not yet..." 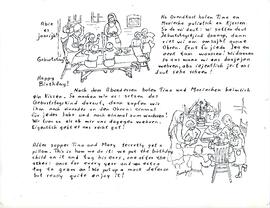 Sketches of Marta's family celebrating a birthday in their home.
"Happy Birthday! After supper Tina and Mary secretly get a pillow. This is how we do it: we put the birthday child on it and tug his ears, one after the other: once for every year and an extra tug to grow on! We put up a mock defence but really quite enjoy it!" 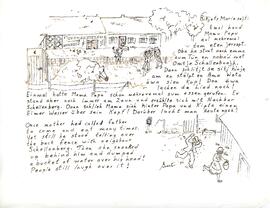 Sketches of a woman playing a joke on her husband on their farm in Chortitz, Manitoba
"Once mother had called father to come and eat many times. Yet still he stood talking over the back fence with neighbour Schellenberg. Then she sneaked up behind him and dumped a bucket of water over his head! People still laugh over it!" 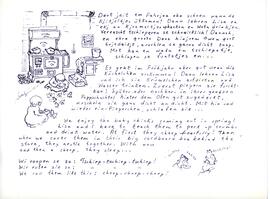 Chick by the stove

Sketches of Marta and another girl playing with baby chicks in front of the stove in their house.
"We enjoy the baby chicks coming out in spring! Lisa and I have to teach them to peck up crumbs and drink water. At first they cheep fearfully! Then, when we cover them in their big cardboard box behind the stove, they nestle together. With now and then a cheep, they sleep... We call them like this: cheep-cheep-cheep!" 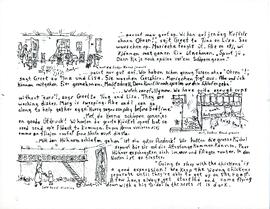 Sketches of a family completing chores before going to bed for the night
""...Watch carefully now. We have quite enough cups without "ears"! says Greet to Tina and Lisa. They are washing dishes. Mary is sweeping. Abe and I can go along to help gather eggs. "Hurry so you can play before bedtime."
"Going to sleep with the chickens" is a good expression! We keep the young chickens separate until they're able to get up on the roost. A few hens always get startled and come flying down with a big to-do! In the nests it is dark.
Left hand drawing" 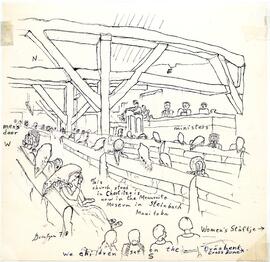 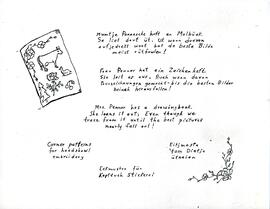 Sketches of patterns from a drawing book that was used as embroidery patterns
"Mrs. Penner has a drawingbook. She loans it out; even though we trace from it until the best pictures nearly fall out!
Corner patterns for headshawl embroidery" 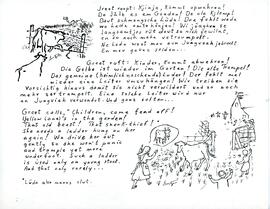 Cow in the garden!

Sketches of a cow breaking into the family's garden, and the family chasing it out again
"Greet calls: "Children, come fend off! Yellow (one)'s in the garden! That old beast! That sneak-thief! She needs a ladder hung on her again!" We drive her out gently so she won't panic and trample yet more underfoot. Such a ladder is used only on young stock, and that only rarely..." 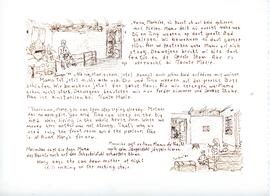 Sketches of a family in their rural house in Chortitz, Manitoba.
""There now, Mary, you can soon stop crying already. Mother has no more pain. You and Tina can sleep on the big bed. We're living in the whole house now. When we moved here Mother was not strong. That's why we used only the front room and the parlour. Abe is at Aunt Mary's for now." Mary says she can hear mother at night still rocking on the rocking chair." 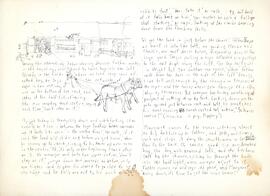 Sketch of Marta and her father moving hay into the loft of the barn using a haysling her father rigged
"Among the interesting labour-saving devices father makes is the haysling, designed to hoist hay into the loft. Already in the fields where we load long rows of raked hay, he lays the network of rope in two sections, one on the bottom of the rack, the other of the half-full, clicking the iron coupling dead centre, saying "don't step on it"!
My job today is trampling down and pitchforking it as evenly as I can in between the huge forkfuls father cascades up. It looks like rain. "Is the centre firm?" he calls, "if it isn't, the load will slide out before we get home." Then he comes up to check, sinking to his knees all over, even in the centre! Ah, it's only the beginning: I can't step on it. He arranges and locks the upper section, "Don't step on it;" jumps down and proceeds as before, only now higher and higher. I'm scared to go close to the edge and he tells me not to be such a "rabbits foot", "Here, take it," he calls, I try, but half of it falls back on him. "You musn't be such a fullgeshat stocking," he says, looking at the clouds bearing down from the Pembina Hills...
We get the load in just before the shower! After Faspa we hoist it into the loft, me guiding Maude and Charlie, our most docile horses, diagonally across the large yard. They're pulling a rope attached via pulleys to the rail high along the loft. The top half goes in alright but the bottom one opens! "Whoa" father calls from the hole in the side of the loft though I can tell well enough by the change in tension in the rope and the horses who've gone through this often stop by themselves. But someone has to say something at prospect of getting it up by fork. Looking down on the pile spilled just between rack and loft, he scratches his head shoving his sweat-soaked hat askew, "Schweinarie!" (Schwein is pig. Piggery!)
Margaret comes to the rescue, pitching almost as big forkfuls up as father, and Betty and I carry, push and slide it along the smooth-worn wide plank floor to the back. It smells good, the sun-drenched hay, they dry well-beamed loft, and the freshness left by the shower, spilling in through the hole into the half-light, when our eyes adjust to it. Father comes up and says it's good, and Margaret "Hurry down, it's time to get the cows home!" 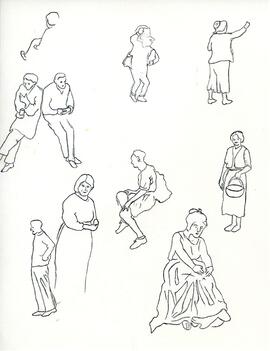 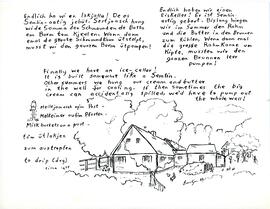 Sketch of a newly-built ice cellar by a corner of Marta's family's housebarn circa 1395
"Finally we have an ice-cellar! It is built somewhat like a semlin. Other summers we hung our cream and butter in the well for cooling. If then sometimes the big cream can accidentally spilled, we'd have to pump out the whole well!
Milk buckets on a post - to drip (dry)
Circa 1935"