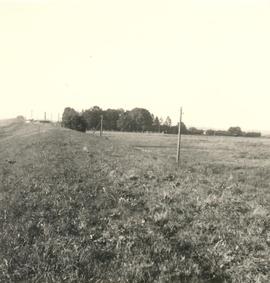 A Dam in the area

This photo is of a dam. Electrical transmission poles run along side it. In the back, behind some trees is a sluice. Here the Weichsel [Vistula] branches off towards the Vistula Lagoon. 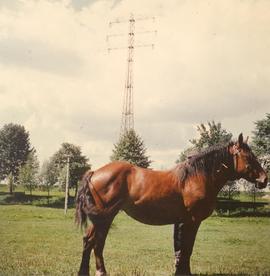 This photo is of an attractive brown horse. There is a row of trees behind the horse. In the background is a tall transmission tower. The ground is flat. 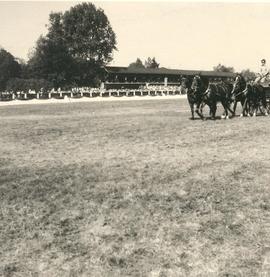 A team of Horses at the old race track of Zappat

This photo is of the old race track at Zappat, Poland. It shows a team of horses driven by a person sitting on a wagon. There are spectators behind a fence in front of stables in the background. 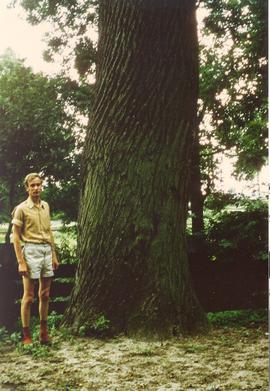 Alfred Wiebe beside an old Oak at Fürstenau

This photo is of Alfred Wiebe standing beside a large oak tree in Fürstenau, Poland. This oak tree is on the property of an evangelical church in Fürstenau that is over 700 years old. There are other smaller trees in the background. 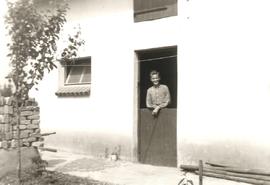 This is a photo of Alfred Wiebe looking out of the top half of a Dutch door of a barn used for pigs and chickens. It is a white building with a window to the left of the door. A partial brick fence is on the extreme left of the photo and a small tree is growing in front of it. 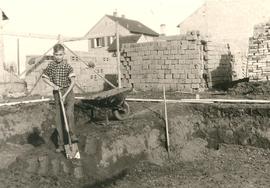 This photo is of Alfred Wiebe in Dirmstein digging the foundation of a house with a spade. The size of the house is laid out with wooden boards. A wheelbarrow is to the right of the boy. Bricks are stacked up behind the construction site. Behind the bricks are several buildings. 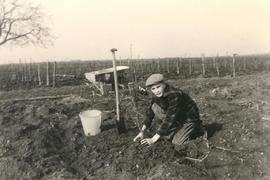 This photo is of Alfred Wiebe planting trees. He is kneeling beside the sapling. A spade and a white bucket are beside the tree. In the background all the recently planted trees can be seen. A large wheelbarrow is seen in front of the rows of saplings. 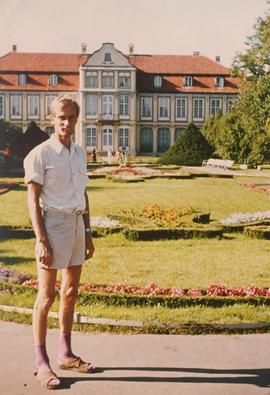 This is a photo of Alfred Wiebe with the Opatow Palace (Abbott's Palace) in Oliwa, Danzig in the background. The palace was built between 1754 and 1756. There are beautiful grounds in front of the palace. The palace houses the West Prussian museum. 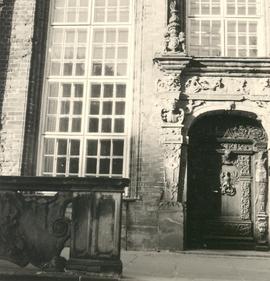 An entrance to a building in Danzig

This is a photo of a building in Danzig, Poland showing an example of an artistic doorway and famous metal works railing. The stone building has many windows. 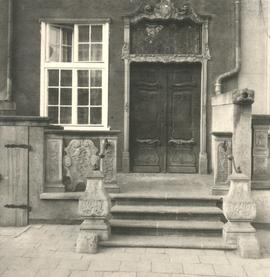 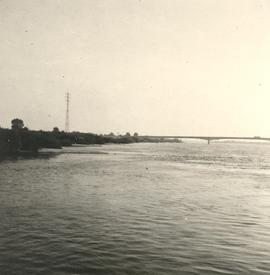 Another view of new bridge

This photo is of the Weichsel [Vistula] River with the new bridge, built in 1973, in the background. The river here has a strong current and whirlpools. On the left side of the photo shrubbery can be seen. An electrical transmission tower can also be seen in the background. This tower transmits power to Konigsberg Elbing. 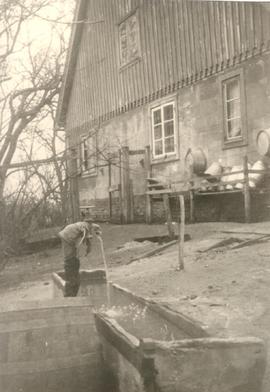 This photo is of an artesian well in front of a house. The water from the well is running into a trough. There is a large barrel in the foreground on the left side. The photo shows one end of a two-storey house. Three windows are visible on the main floor and one on the second floor. A rack containing tubs and barrels is attached to the house. On the left side are trees without leaves. The area between the house and the well is bare. 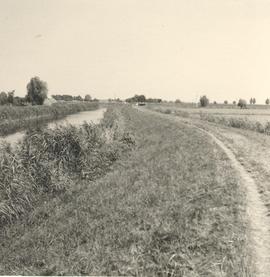 This photo is of a flat field with some taller grasses growing beside a sluice in Rosenau, (currently known as Jastrzebowo). A building is visible off in the distance. The road is on top of a dike, dividing the field from the water on the left. 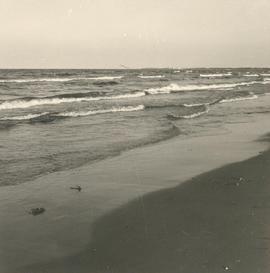