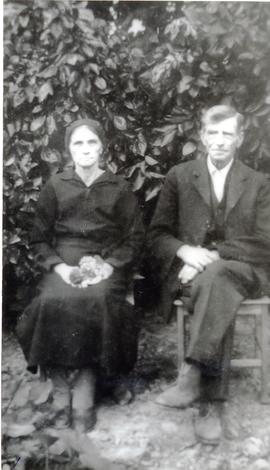 This is a photo of Abraham R. Bergen and his wife Maria Bergen (nee Maria Neufeld) sitting on a chair posing for a photo in Paraguay. Greenery is used for a backdrop. In her hand she is holding flowers. They are both dressed in dark clothing. They were married in 1913 in Manitoba and moved to Bergthal, Paraguay in 1927, as part of the Sommerfeld Mennonite Church. 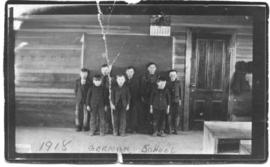 This is a photo of eight young boys posing for a photo in front of the blackboard in their school. The photo was taken in the private run, German school in the Neu Kronstal district, north of Plum Coulee, Manitoba on the Mennonite West Reserve. Front row, far right is John Kroeker. Behind him (to the right) is John's older brother Klaas Kroeker. 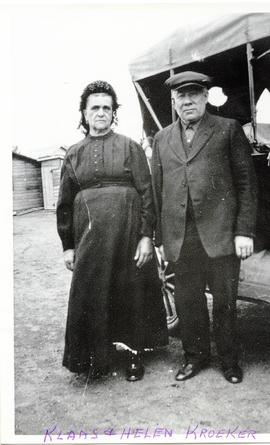 This is a photo of Klaas Kroeker and his wife Helena Kroeker (nee Helena Dyck) standing beside a car that has a cloth roof cover. Both are wearing dark clothing, with Helena wearing a tradtional head covering and Klaas a three piece suit. Out buildings can be seen in the background. 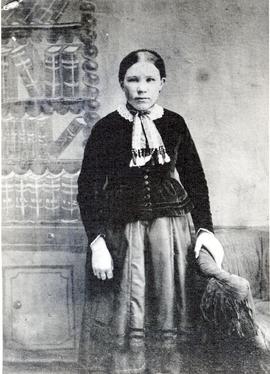 This is a photo of Maria Kroeker, sister to Peter Kroeker, taken when she was approx. 18 years old. She is standing with her hand on a couch and a painted backdrop is behind her. 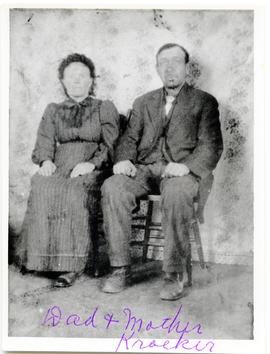 This is a photo Peter Kroeker and his wife Elizabeth Kroeker (nee Elizabeth Hiebert) seated on chairs posing for a photo. Elizabeth is weariong a tradtional Mennonite headcovering. Peter is wearing a three piece suite with a light coloured tie. Annotations by son John Kroeker on back. Most likely taken in 1926. Peter and Elizabeth farmed south of Plum Coulee in the Mennonite West Reserve of Manitoba.