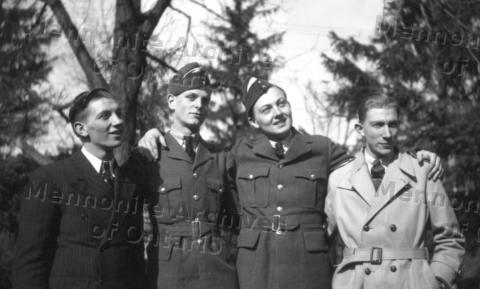 Caption in Risk and Endurance: "These young friends made different decisions in the face of war. l to r: Donald Millar, Gordon Eby, Bob Rahn, Doug Millar. The Millars served as COs. Gordon Eby, a United Church member, and Bob Rahn, a Lutheran, joined the Air Force. Rahn was killed overseas." Donald and Doug Millar are in civilian clothes while Gordon and Bob are in military uniform.

Negative and a print are located in Hist.Mss.1.66.8/1 Gordon Eby fonds.