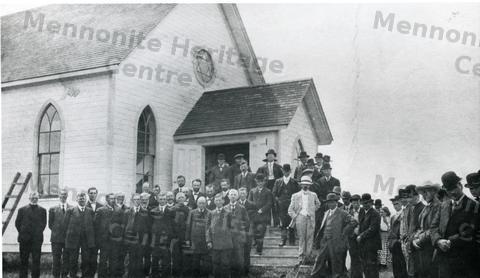 Delegates attending what was then known as the Conference of Mennonites in Middle Canada (later known as General Conference of Mennonites in Canada) annual conference. It was the its 7th annual session and occurred in Edenburg, Manitoba. The men on the left all do not have hats on while those on the right do. Visible in the photo are: second row from front, 4th from left is Peter Regehr, 6th from left is Heinrich H. Ewert. Behind him to the right is his brother Benjamin Ewert, and behind Heinrich Ewert to the left is David Toews.

This item is a photographic reproduction. With this photo is a negative 7.5 x 6 cm. This item was deposited by an unknown person to Lawrence Klippenstein who kept it in his possession until it was added to accession number 2002-074.