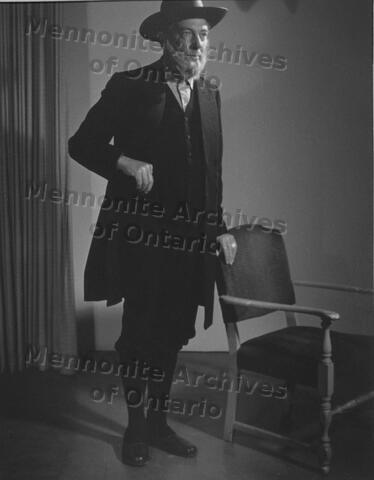 Donated to the Archives from the estate of Anne (Eby) Millar

Doug Millar in costume as Christian Eby for the drama "Trail of the Conestoga," a play based on the novel by Mabel Dunham about the early Mennonite settlers of Waterloo County. A note by Anne Millar accompanies the photograph: "Doug as Christian Eby in the play 'Trail of the Conestogo' [sic]. Doug's personal background was a mix of Scottish and P[ennsylvani]a. German and he enjoyed his involvement in both cultures - the world of Robbie Burns and the ways of trhe Pa. Germans. The Millar clan is included with others in the MacFarlane tartan."