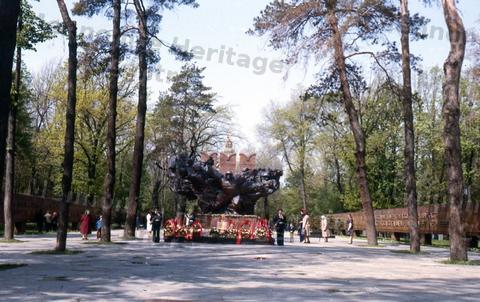 Park of 28 Panfilov Guardsmenis an urban park located in east-central Almaty in the area surrounding the Ascension Cathedral. It is dedicated to and named after the Panfilov heroes which were the 28 soldiers of an Alma-Ata Infantry unit who allegedly died while defending Moscow from the German invasion during the Great Patriotic War. The group took its name from Ivan Panfilov, the General commanding the 316th division which, in spite of heavy casualties, believed at that time managed to significantly delay the Germans advance to Moscow, thus buying the time for the defenders of the city. An eternal flame commemorating the fallen of the World War II and the Great Patriotic War burns in front of the giant black monument of soldiers from all 15 Soviet republics. (Wikipedia)