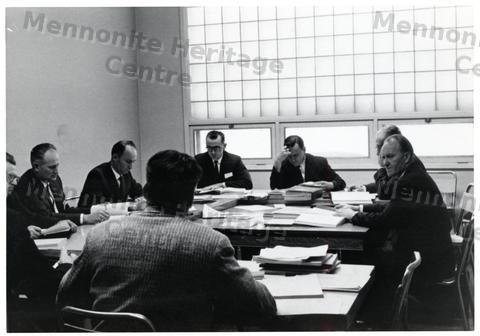 Henry (H.T.) Klassen was born on 11 June 1912 in Kronsgarten, South Russia to Theodore Klassen and Katharina Bergen. He immigrated to Canada with his family in 1923 and eventually settled at Rabbit Lake, Saskatchewan where he was ordained as a Mennonite minister in 1938. In 1939 he married Clara Epp, daughter of Peter P. & Margaretha (Bahnman) Epp. He received some of his early theological training at Winkler Bible School (1943-44) and Mennonite Brethren Bible College (1944-45). He taught at Rosthern Bible School from 1946 to 1957. From 1957 to 1977 H.T. and his family lived in Winnipeg. During this time he studied at Canadian Mennonite Bible College, he became pastor of the Sterling Avenue Mennonite Church in St. Vital, worked as a hospital chaplain and was executive secretary of the Conference of Mennonites in Canada Board of Education for 5 years. Earlier he had been a member of the General Conference Mennonite Church Editorial Committee responsible for producing new Sunday School curriculum. He was also involved in radio ministry as a speaker on the program Wings of the Morning (later called Wings of Peace).

Henry and Clara Klassen retired to Abbotsford, B.C. in 1977, where H.T. continued to service the church in various short term assignments such as pastoring (Yarrow church, Olivet church), speaking at the Menno Home, leading Bible studies in the Fraser Valley and also in other countries like Mexico where he travelled to in 1980.

This is a photo of the Board of Missions. (Left to right): H. H. Neufeld, John Siemens, John Krahn, Menno Wiebe (back to camera), Corny Rempel, Henry Funk, Henry Gerbrandt, George Groening.