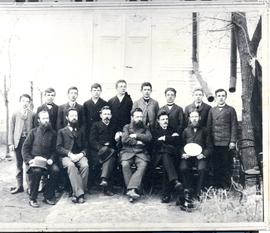 This photo is of the 1895 Pedagogy class and teachers of the Halbstadt Zentral Schule. Back row, third from left is Gerhard J. Thielmann (1878-1949), later of Niagra, Ontario.

This photo is a formal photo of four young girls. They are, left to right clockwise: Anna Gossen, aged 6, Lena Kliewer, aged 3, Wanda Kliewer, aged 5 and Elfrieda Gossen (later Dyck) aged 4. Elfrieda’s mother had made the dresses, which Anna and E... 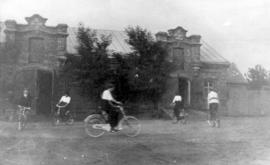 This photo is of 5 young people cycling in front of the Fehderau family stable. 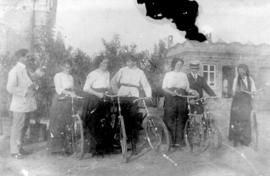 7 people at a cycling party on the Fehderau's property

This photo is of a cycling party on the Fehderau property. On the left is Nocholas J. Fehderau's brother-in-law, Jakob Dyck; second from the right Ernest Gosemann. The family's summer kitchen is in the background.

7 women posing for a photo with the goat they used for milk.

This photo is of a group of women taken in Halbstadt in October 1942 includes Elfrieda (Gossen) Dyck’s grandmother, Anna (Wiens) Rempel who is sitting in the middle. The family milked this goat because they couldn’t afford a cow. The photo was giv... 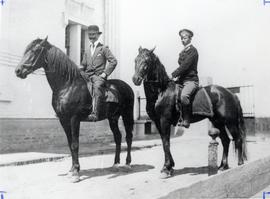 This is a photo of Bartel to the left and Dr. Johann Dyck to the right, Halbstadt, Molotschna. [HR 173] 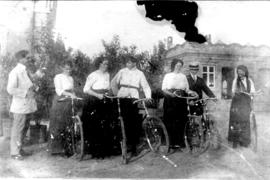 A cycling party on the Fehderau property. On the

A cycling party on the Fehderau property. On the left is Nicholas J. Fehderau's brother-in-law, Jakob Dyck; second from the right is Ernst Gosemann. The family's summer kitchen is in the background. 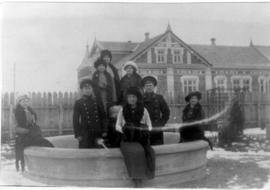 A group of young people at the home of Jakob

A group of young people at the home of Jakob Dyck, who became the brother-in-law of Nicholas J. Fehderau. 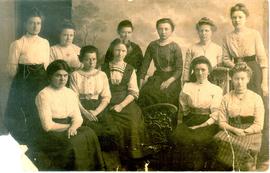 A group of young women. Rita's great-aunt, Anna Letkemann sister of her grandmother, Maria (Letkemann) Barkowsky is second from the right in the front row. As a single woman, Anna Letkemann was sent to Siberia and came to Canada in the 1940s. 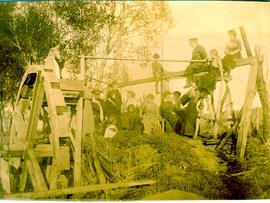 A social outing at the mill.

A social outing at the mill. 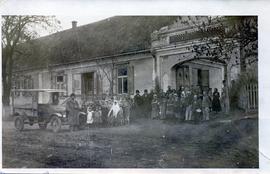 This is a photo of a group of younger children standing separated from a group of adults and older children in the archway of a one-storey building in Halbstadt. There are some unidentified AMR workers and a car (or truck) on the picture. 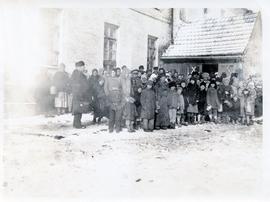 This is a photo of a large group of people, many of them children, some with pails, in front of a building in Halbstadt, Molotschna. They are dressed in winter clothing and there is snow on the ground. A big man, holding a briefcase, is watching ... 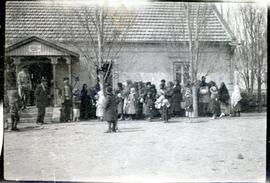 This is a photo of a group of about 50 people in winter garb lined up alongside a building which housed the kitchen for the American Mennonite Relief. Some Relief workers are standing at the entrance doors. 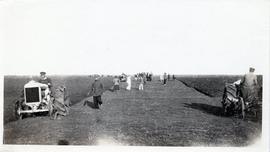 This is a photo of several tractors in action on a large open field in the Halbstadt, Molotschna, area in Russia, with a number of workers and onlookers roaming about. The tractors were provided by the American Mennonite Relief.

Abraham Unruh seated with his guitar

The 18 year old Abraham Unruh, Alida’s maternal uncle, is seated with his guitar. Abraham was the brother of Anna Unruh, Alida’s mother. The photo was taken Aug. 22, 1943 and sent to Anna Unruh who was living in Leipzig, Germany at that time. Abra...