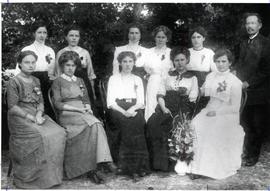 This is a photo of some of the former students of the Halbstadt Maedchenschule (girls school) in the garden of Elder Unruh. At the back stands the teacher Kornelius Wiens and Miss Katharina Willms (second from left in the first row). Next to her, ... 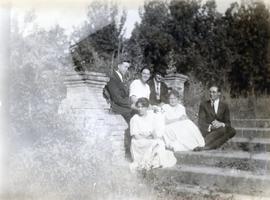 This is a photo of a group of three men and three women relaxing on the outdoor steps of a walkway in Halbstadt, Molotschna.. In the back (left to right): Arthur Slagel, Helena Lepp. The others are unidentified.

This photo is related to #12 and shows some of the kindergarten children taught by Anna (Wiens) Rempel, grandmother of Elfrieda (Gossen) Dyck, during 1939 and 1940 in Halbstadt. Anna, with white hair, is standing in the back row near the middle. 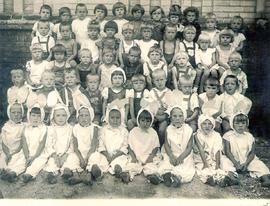 Anna (Wiens) Rempel, grandmother of Elfrieda (Gossen) Dyck, was a teacher and principal of a large kindergarten in Halbstadt. Anna’s husband Dietrich was taken away in 1941 with all the other men of the area. They were sent to Siberia where they d... 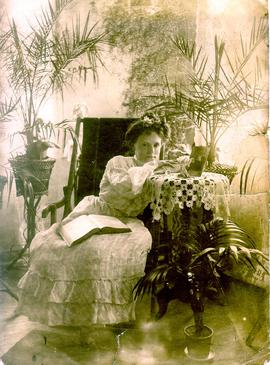 Anna (Wiens) Rempel, grandmother of Elfrieda (Gossen) Dyck, poses, a book on her lap, surrounded by palm-leaf and myrtle plants. An exact date for this picture is not available. We do know that Anna was married at 18 years of age in 1901.

Anna Wiens and her family posing for family photo

This photo is a formal family photo taken on the occasion of the engagement of Elfrieda (Gossen) Dyck’s grandparents, Anna Wiens and Dietrich Rempel, standing. Anna’s younger brother Peter stands at the right. Anna’s parents (and Elfrieda (Gossen)...

This file consists of the following items:Translated articles on the subject of Self Defense during the Revolution in 1918 were written by A. Klassen, Jacob Martens, H. Neufeld, Peter Braun, Elder H. Unruh, Abraham Kroeker, H. Neufeld, and some an... 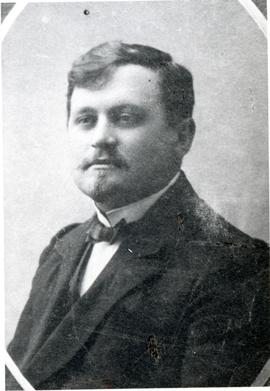 This is a photo of Benjamin Unruh, Halbstadt [HR 183].

Board and Teachers of the School of Commerce

This is a photo of the board and the teachers of the Commerce School. [HR 188] 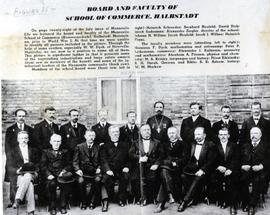 Board and faculty of the School of Commerce, Halbstadt

Cemetery where some of Nicholas J. Fehderau's relatives are buried

This photo is of young people socializing (playing a game) in the foreground, The church cemetery is in the background. Nicholas J. Fehderau's father, nephew, sister Tina's son Jakob (Jaschinka), and his aunt, Sara, were buried there. 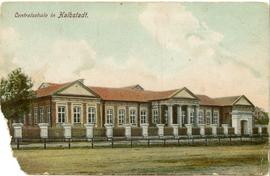 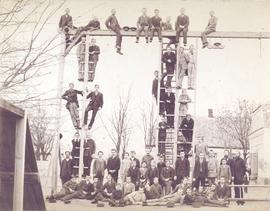 Teachers and students pose below and on a climbing apparatus in Halbstadt. On back of photograph: "High School (Fortbildingschule) in Halbstadt. Grandfather David Friesen on ladder to right - third from bottom, about 1898." The photograp...