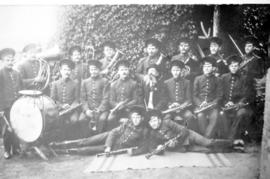 This photo shows 16 men with their musical instruments and a conductor with his baton. The band consists of 2 clarinet players, 7 cornet players, 4 baritone horn players, 1 trombone player, 1 tuba player and a percussionist (bass drum, cymbal, tr... 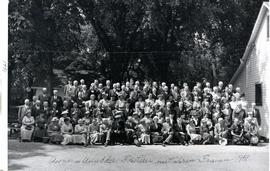 This photo was taken at a reunion of Mennonite men who did Russian state alternative service in forestry camps at Azov and Anadol. The photo is taken at Camp Assinaboia near Headingly, Manitoba and it shows the men with their wives -- a total of ... 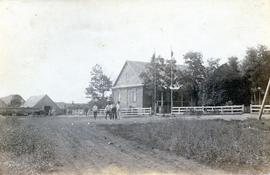 This photograph shows a roadway with a building in the background, surrounded by a few trees and a low fence. It is probably the Kaserne in the Azov Forstei in Russia. This photograph can also be found on page 49 of the book Mennonite Alternativ... 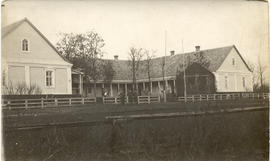 Barracks at the Azov Forestry camp

This photo is of four young men dressed in alternative service uniforms standing outside a large brick "U" shaped building posing for a photo. Other people can be seen in the background on the porch of the building. A street runs in fr... 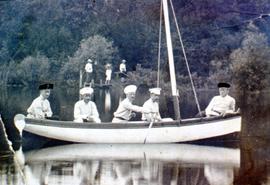 This photo shows five men in a row boat with another 3 people standing at a small dock on the shore, near the Sea of Asov. L-R: David Friesen, ? Enns, David Froese, ? Janzen, Gerhard Wiens. 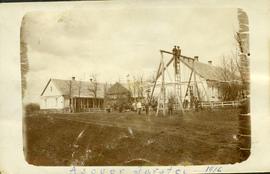 This is a photo of men standing along a fence surrounding several buildings. On the right is a n A-frame structure with a ladder and some ropes attached. There are three men on the ladder and two men on the small platform attached to the ropes. At... 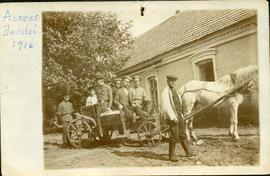 This is a photo of men and a horse drawn cart in front of a building. There are two men standing behind the cart, four are sitting on the cart and one is standing by the horse. At the Asov Forestry camp. 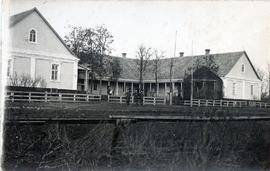 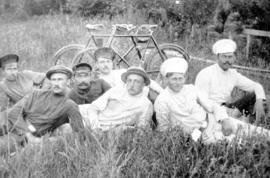 This photo shows seven men relaxing in the wild grass, probably on a Sunday afternoon. Two bicycles are in the background. Heinrich Dyck (1887-1963) who later lived in Vineland, Ontario, in the man in the centre with the hat. 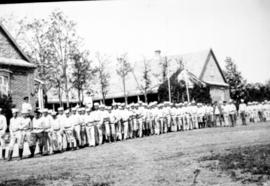 This photo shows the contingent of forestry service men at Asov in their working cloths. (compare with Quiring's Als ihre Zeit..., p. 167) 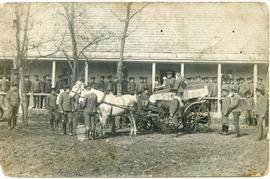 Funeral of one of the men in the Forestry Camp.

This photograph shows a horse-drawn wagon with a coffin, in front of a building probably the Kaserne at the Azov Forstei. There are two copies of this picture. The 2nd copy has some Russian words with the date 1913, a German note "the one i... 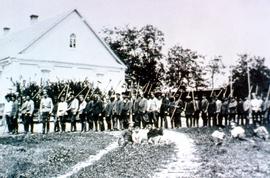 Group of men in forestry service in Russia

This photo shows a group of Mennonite men lined up with their planting tools and ready to march. They are mostly older men. The man in the 3rd row of marchers, standing by himself, is the commander Johann Dueck. Several men are reclined on the gr... 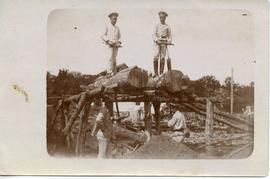 Harvesting trees in the Alternative Forestry Service in Russia 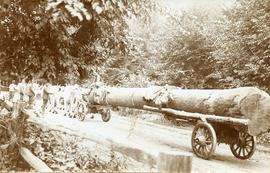 Harvesting trees in the Forestry Service

This photograph shows a long log hauled on two 2-wheeled carts pulled by oxen on a road in the Azov Forestry Camp in Russia. A group of 5 men, or more, are supervising. This photograph can also be found in Mennonite Alternative Service in Russi...