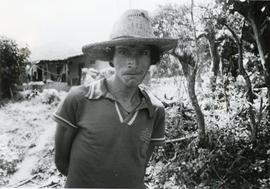 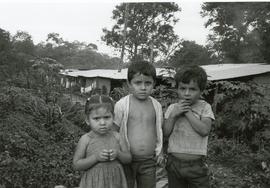 This is a photo of three children in a camp for displaces persons in El Salvador. They cannot remember a time when their country was at peace. The U. S. government wants to send $60 million to buy more guns. Church leaders are calling for dialogue... 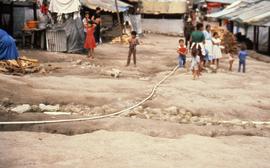 The presence of international workers in this camp deterred the army from killing refugees near the Honduras / El Salvador border. 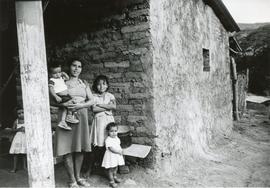 This is a photo of a peasant woman and her children in front of their new adobe brick house in La Florida. As a result of the massacre in which her husband was killed she fled from the cooperative and was last seen in a displaced persons' cam... 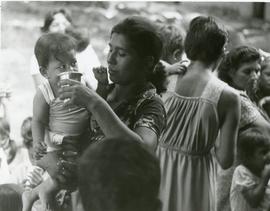 This is a photo of a displaced Salvadoran mother, victim of the civil war, giving her child a drink of milk at the nutrition centre set up by the Beachy Amish church and Mennonite Central Committee in Guazapa, El Salvador. The Swiss Mennonite Chur... 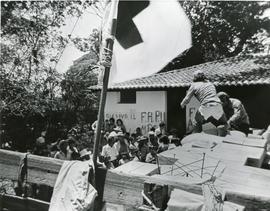 This is a photo of a two-week supply of food arriving at La Bermuda camp in El Salvador, where MCC supported CESAD has cooperated with the Green Cross. The Green Cross is an independent Salvadoran organization that has been most successful in aidi... 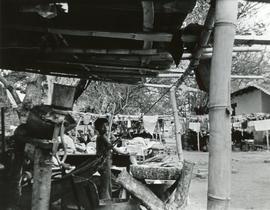 This is a photo of makeshift shelters at La Bermuda refugee camp in El Salvador, where 1,000 people have been living. 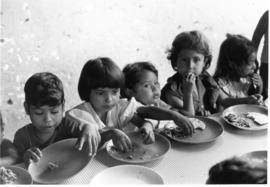 This photo is of refugee children. They are sitting at a table and enjoying a meal of MCC beef and tortillas at the nutrition center in Guazapa, El Salvador. 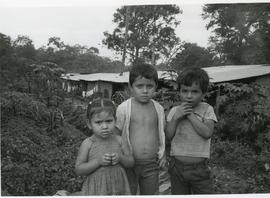 This photo is of three young El Salvadorian Children. A make-shift camp for displaced persons is visible in the background. 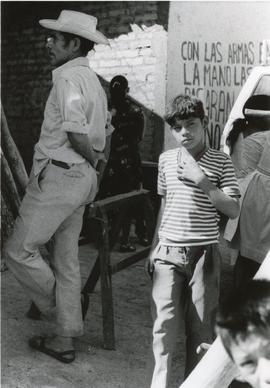 This is a photo of a Salvadoran boy standing in front of a sign protesting fighting in El Salvador. This boy has lived through six years of civil war in his country. 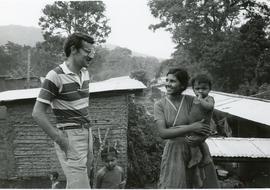 This is a photo of John Lamb talking to displaced persons in camp near San Salvador.The houses behind have tin roofs. In the distance there is a hill. 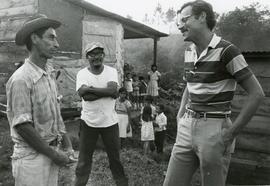 John Lamb talking with Salvadoran owner of a new house

This is a photo of MCCer John Lamb talking with Salvadoran owner of a new house built with MCC help. Alejandro, supervisor of the project in San Jose Guayabal, is looking on.

This slide show consists of 70 color slides that depict the landscape, people of, Mennonites of, and the Work of MCC in El Salvador, Nicaragua, Guatemala, Honduras, Belize. Photos and script by J.M. Klassen. -- Note: With the slides is a script, a...

MCC Slide Presentation-Hear Us: Voices Out of Central America

This slide show consists of 111 color slides depicting the people of Central America, including the countries of Honduras, El Salvador, Guatemala, and Mexico. The slides show the context of the average person, their farming techniques and how peop...

This 23 minute slide show consists of 136 color slides showing the people in the Central American counties of Guatemala, El Salvador, Nicaragua as well as the Mennonite Church leaders and their activities in these countries. 8 different North Amer...