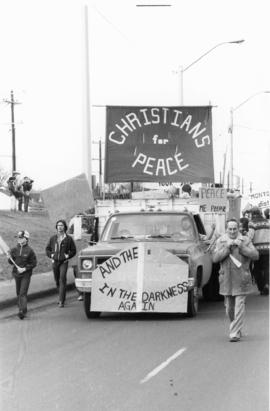 This photo is of a peace march in Edmonton. A banner reading "Christians for Peace" is at the centre of the photo.

This photo is of peace protestors with a banner reading "Love Your Enemies -- Jesus" at a peace rally in Vancouver. Roger Brandt is standing at the front left. 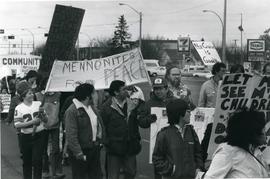 This photo is of a group of protesters carrying banners on a peace march. One of the banners reads "Mennonites for Peace." Rudy Wiebe stands at the centre with the glasses and plaid jacket on. 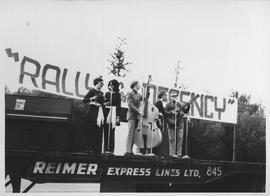 "Rally for Decency" in Winnipeg 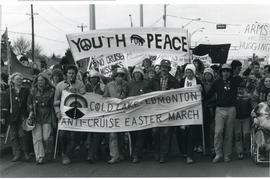 This photo is of a group of protestors carrying banners at a peace rally. At the front of the pack is a banner that reads "Youth For Peace." and "Cold Lake - Edmonton Anti-Cruise Easter March" another sign says "Arms ar... 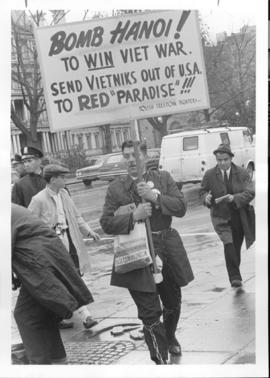 A demonstrator in Washington, D.C.

Used in CM 13-48-1. A demonstrator in Washington, D.C. carries a sign in the counter demonstration: "Bomb Hanoi to win Viet War" (Polish Freedom Fighter). A photo by Sam Steiner.

This photo is of a large crowd gathered by a waterfront and listening to a music group at a peace rally. 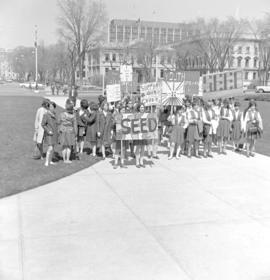 A smaller group of students on the grounds of

A smaller group of students on the grounds of the Legislature. Students of Westgate Collegiate?

A woman demonstrates in Washington, D.C. in favour of a military victory in Vietnam

Aerial view of a peace march.

This photo is an aerial shot of a peace march in support of nuclear disarmament.

This is a photo of American demonstrators protesting the imminent visit of Soviet Baptist and Mennonite church leaders by carryingsigns in front of the Mennonite Central Committee Office. 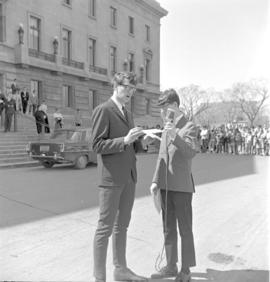 Bob Wall, a senior at Westgate Mennonite Collegiate read a paper addressed to the Manitoba government

Negatives only (4). Used in CM 16-19-4 where Bob Wall, a senior at WMC, "read a paper addressed to the Man. gov't, representing the Westgate students. Bottom neg. of the 2 attached was used. Three add. ones. Olden. for negs. also 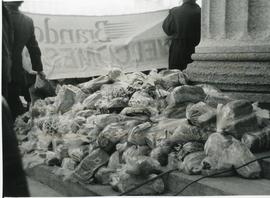 Bread on the legislature steps

This photo is of a pile of bread lying on the steps of the legislative building in Winnipeg. The bread is a form of protest used at a farmers' rally. 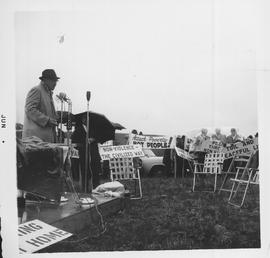 Negative also. Used in CM 13-30-2. Chairman Peter G. Makaroff speaks at microphone amid signs placed on lawn chairs at the "Manifestation for Peace" at the RCAF Radar Base at Dana near Saskatoon. Series continues to 2001-14.259. C.f. re... 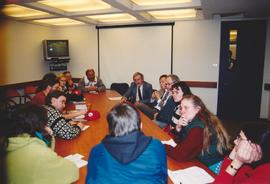 Participants in the Christian Peacemaker Teams (CPT) protest action at the International Monetary Fund (IMF) meet with IMF staff following their action. Doug Pritchard and other full and part-time CPT staff are present, along with CPT supporters.