This slide show is about the social, economic, and governmental settings in Africa (including AIDS). Commission on Overseas Missions and African Inter-Mennonite Mission (AIMM) has workers in Burkina Faso, Zaire, Lesotho, Botswana, and Transkei, S... 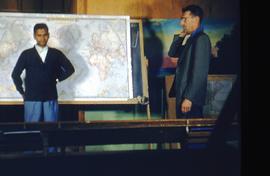 This photo shows O. Waltner and S. Stephen, India participating in a Commission on Overseas Mission retreat at Camp Arnes.

This slide presentation provides an historical overview of the overseas mission work of the General Conference Mennonite Church in the countries of India, China, Congo, Japan, Taiwan, Colombia, and new fields in Africa and Latin America. Prepared...

God's Creative Spirit in the World 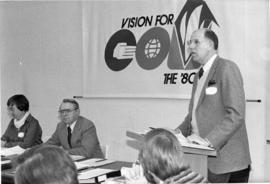 This is a photo of Howard Habegger as he is delivering his last report as secretary for COM (Comission on Overseas Missions). 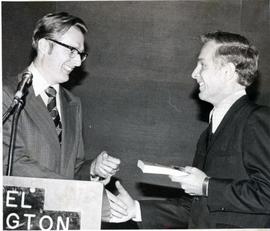 This is a photo of James Juhnke, author of "A People of Mission" presenting a copy of the book to Vern Preheim, chairperson of theCommission on Overseas Missions.

One Hand Alone does not Clap

Part of General Conference-COM Slide Show: Sort of Like Me

This slide show is about the similarities and differences between children in North American and Africa emphasizing commonalities. An audio cassette (see AC # 2748) and script are included.

The Inner Strength of Asia

This slide show is about the the cultural setting and how it is changing in Asia. Common Asian scenes are shown. Commission on Overseas Missions has workers in Asia in China (Carl Epp, Hilda Epp, Mennonite Christian Hospital), Japan (Hiroshima),...