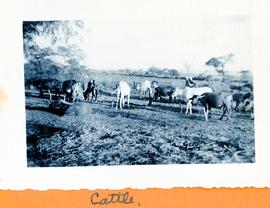 This photo is of a herd of cattle in a field of grass. A shade tree is on the left of the photo and other trees in the background. A man is standing with the cattle. 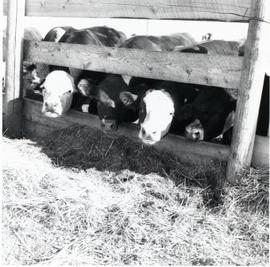 This is a photo of cattle eating hay through a wooden fence.Note: this photo has a negative 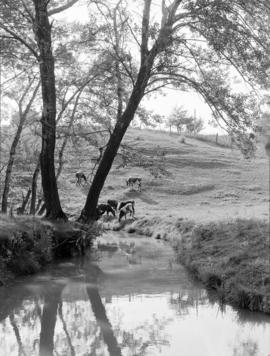 Cattle by the water under trees, in Port Dover,

Cattle by the water under trees, in Port Dover, Ontario. August 1951. Hunsberger photo 42-90 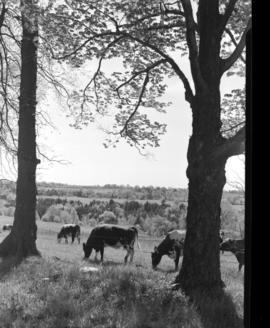 Cattle grazing by big trees near Elora, Ontario, across the valley over the park area. May 19, 1953. Hunsberger photo 42-106 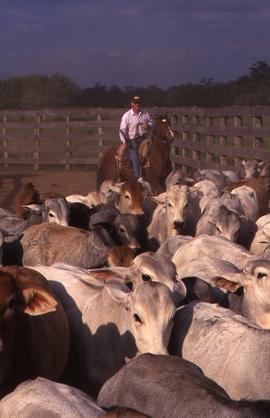 This photo is of Epp riding horse back, corralling his Brahma cattle at his ranch in Fernheim Colony. Used in the book" Garden in the Wilderness", by Edgar Stoesz p. 187. 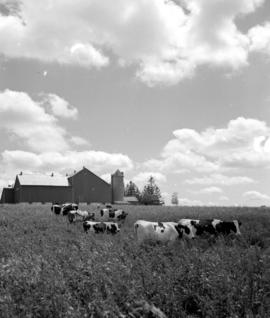 Cattle in the field near Punkeydoodles Corners, Ontario 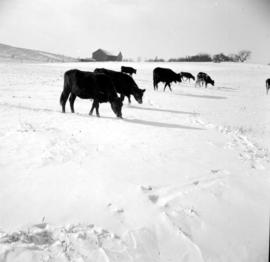 Cattle in the snow, south of Wellesley, Ontario 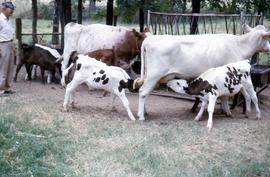 Part of Garden in the Wilderness photo collection (CMBC Pub.)

This photo is of cattle on a pasture on the outskirt of Loma Plata, Menno Colony. 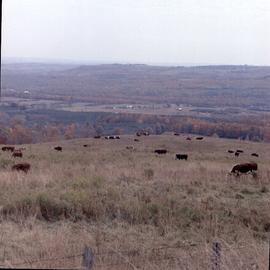 Cattle on the hillside in the fall, near Stayner, Ontario

Cattle on the hillside in the fall, near the Stayner area, Ontario. 1973. Colour negative. Hunsberger photo 21-142 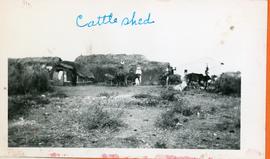 This photo is of a cattle sheds built of brick with thatched roofs. There are some cattle outside and a few people tending to the animals including a female missionary. 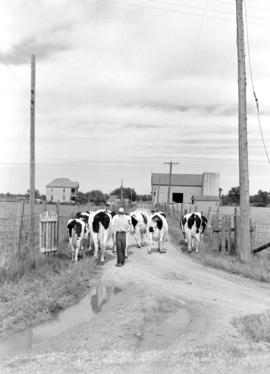 Cattle walking up the lane at Dan Cressman's farm 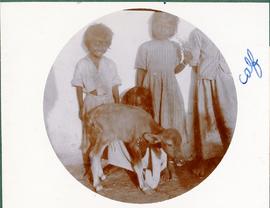 Children and a calf

This photo is of 4 children standing behind a calf. One little girl is crouching behind the calf, while the other children are standing against a wall.

Part of Garden in the Wilderness photo collection (CMBC Pub.)

This photo is of coraled cattle in Fernheim Colony waiting to be transported to a slaughterhouse, likely in Asuncion. 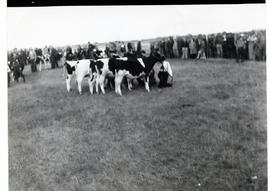 Cows at a fair

About 5 cows are lined up, with some men looking at them. A crowd of people are standing at a distance.