This is a photo of a group of twelve people wearing white, some holding books, singing. 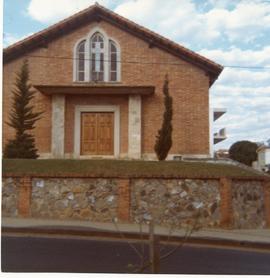 A Church in Brazil

A church in Brazil 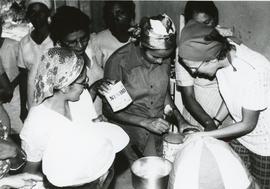 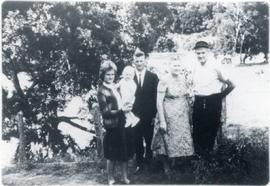 This is a photo of (left to right): Nellie Wiens (Siebert), Carey Wiens, Peter Wiens, Mariechen Siebert (Koop) and Jacob Siebert. Mariechen is Peter Koop's sister. The photo is taken at a mission station in Brazil. 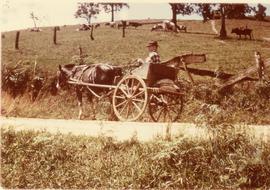 A man in a wagon

This is a photo of Peter Koop in a two-wheeled carriage being pulled by one horse. They are in a rural area in Brazil. There are some cows in a sparsely treed field. Same as 676-129.

A view of our dwelling from the edge of the forest

This photo is of the J. J. Janzen small farm yard from the forest and more forest and hills in the background. 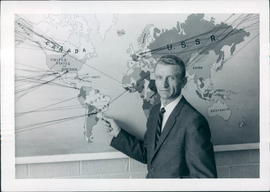 Abe Koop, missionary to Brazil, in front of map

This photo is an aerial shot of the Pan American Christian Academy campus.

This is a photo of a group of peoples standing outisde on a walkway. From left to right, Liliane, Linda Banman, Joas, Vitor Alifsio, Marelene Cabral 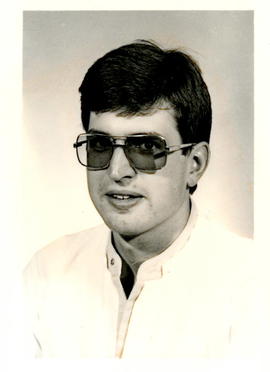 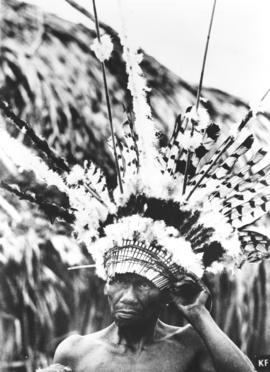 An Indigenous chief in Brazil

An Indigenous chief of the Brazilian jungle. Confined to shrinking territories and harrassed by land-greedy speculators, his tribe may not survive to the end of this century. Used in CM 18-16-1; related article in CM 17-39-3.

This is a photo of four woman standing on the bach with the ocean in the background. Linda Banman is second from the right.

At the Heinrich saw mill.

This photo is of a group of men standing around and on a flatbed truck with a large tree on it at Heinrich's sawmill.