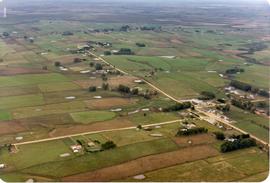 Aerial view of Colonia Nova center and village no. 1 in background, 1984

Aerial view of Colonia Nova center and village no. 1 in background, 1984 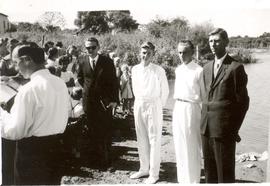 This item shows a large group of forty-nine baptismal candidates at the Colonia Nova Mennonite Brethren Church in Bage, Brazil.

This photo is of a group of children in a pasture playing a circle game in Bage Rio Grande. 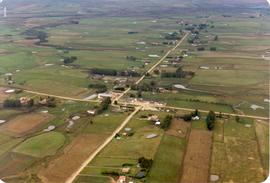 Constructing a home in Bage, Brazil

This item shows a group of pioneer men sitting in front of a partially constructed building, the future home of Gerhard Friesens of Bage. 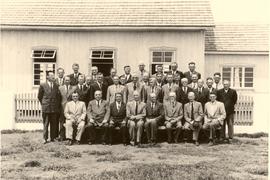 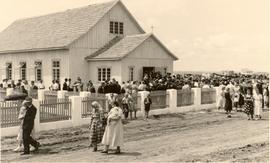 Delegates to the Mennonite Brethren South American Conference in Bage, Brazil, outside of church during lunch break, February 1956

Eating a meal at church?

This photo is of a group of people eating a meal outside a [church?] in Bage, Colony Nova.

This photograph shows a group of men, women, and children out in the open with several tractors and a donkey. These people are the first Mennonite settlers at Bage, in the state of Rio Grande do Sul.

This photograph shows a horse-drawn swather cutting hay on the D. Harder farm in Bage, Brazil.

In front of a sod house.

This photo is of an immigrant family standing in front of their uncompleted sod house in Bage, Brazil. 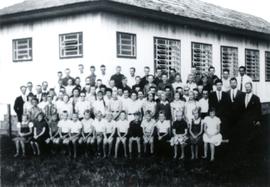 This photo shows students and teachers of the private school in Bage, Brazil.Note: This photo was removed from the South American Trip Report by Peter Koop, in German, filed in Vol. 5489 File 49. 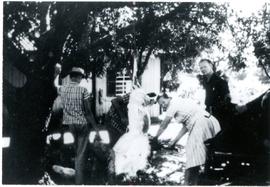 This photo shows Johann Dick skinning a sheep assisted by Lydia (Siebert) Janzen. To the right in the background is Peter Janzen.Note: This photo was removed from the South American Trip Report by Peter Koop, in German, filed in Vol. 5489 File 49.