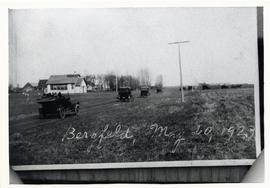 This photo is of a series of cars traveling along a dirt road, past a [school building?] and a farm yard in the Bergfeld area in Southern Manitoba. It appears it is a funeral procession. 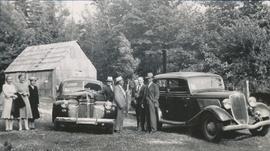 Board members, who were meeting at Harrison Mills, are photographed outdoors standing beside two older model cars which have been identified as (on the left) a 1941 Chevrolet and (on the right) a 1933 Ford. (Left to right): Sarah Esau, Mattie D... 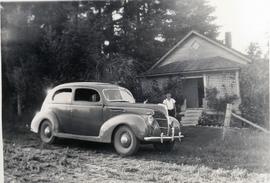 This photo is of a 1940s car parked in front of a house, with a man standing beside the car. 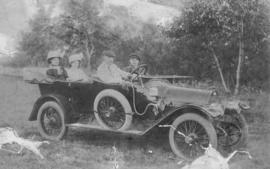 A photo of an automobile with two men and two women seated within. The reverse of the photo indicates that this is Tobias M. Voth's automobile, but that he is not in the picture. A date of 1914 is also inscribed. 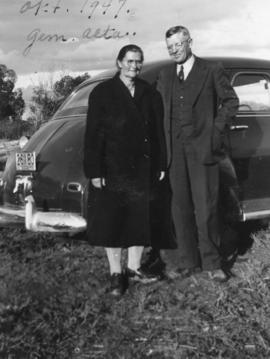 John and Tina Voth on a road trip

A photo of Tina and John Voth in front of an automobile, likely on a road trip. The inscription says Oct 1947, Gem, Alberta. 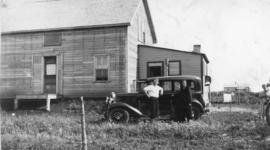 A 1933? photo of John and Tina Voth standing by Franz Kassen's car (see NP214-01-11) in front of the first Canadian home they purchased in 1927, located on a farm near Springstein, Manitoba. 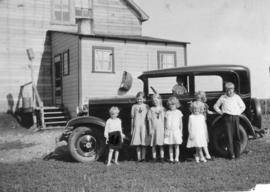 A photo of Franz Klassen's automobile with the Klassen and Voth children standing in front of it, possibly 1933. The house in the background is the Voth home on the Springstein farm purchased in 1927 (see NP214-01-19). 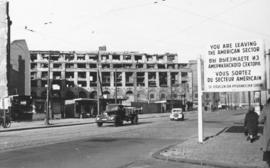 Boundary between American and Soviet sectors of Berlin

Used in CM 5-5-4 with art. by Herb Wiebe, pax man. Potsdamer Platz: boundary between American & Soviet sectors. The shell (ruin) of a large building in the bkgd., sign "You are leaving the American sector," in foreground.

This photo is of the vehicles which guests used to come to Katharina and Peter Wiebe's Kuruschan Estate for a picnic. 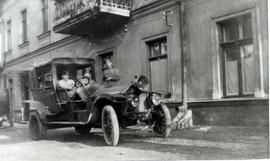 Peter Fehderau driving a car in 1916

This photo is of Peter Fehderau, brother of Nicholas J. Fehderau, who chauffeured this automobile during World War I. 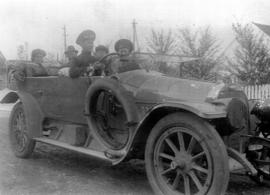 Part of Fehderau family in their 7-seater car

This photo is of some of the Fehderau family in their 7-seater Opel automobile.L-R: Manja, Father Fehderau, Peter (behind the wheel), Nicholas J. Fehderau, and Jascha. 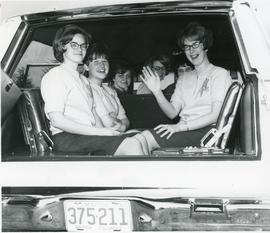 Riding in the MBBI car

Automobile in the early 1900s. 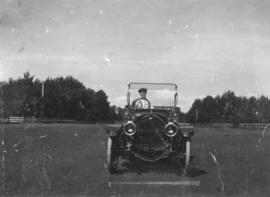 C.F. Klassen driving his father's first automobile in 1913 on the village street in Donskaj.

Negative also. Side & front view of the Niverville MB Church where the annual Man. MB Cf. was held June 4-5. The 25th anniversary of the church was observed on Sunday. Cars are parked beside it (in foreground of photo).