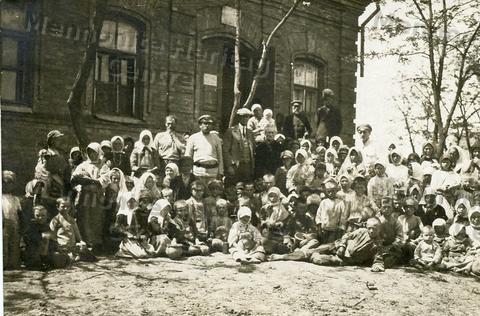 Arthur Slagel (1891-1943) was one of three American Mennonite Relief (AMR) volunteers sent to Russia with Orie Miller and Clayton Kratz in 1920. Initially Slagel remained in Constantinople to gather relief supplies and from there organize the shipment to the Russian Mennonite colonies. From 1922-1923 Arthur Slagel supervised the feeding program for 75,000 people in the Ukraine, including 60,000 Mennonites. The AMR under his direction appointed local committees whose duties were to receive and distribute relief supplies in their districts according to the official AMR instructions. Slagel oversaw the delivery of food for three Mennonite centres -- Chortitza, Ohrloff and Halbstadt.

During his three years on this assignment he also witnessed the first groups of Mennonites leaving for Canada in 1923. He also traveled to Moscow and other countries before returning home to the United States.

Arthur W. Slagel married Vesta Zook in 1925, who had been an American relief worker in Constantinople in 1921, working in an orphanage that Mennonite Central Committee had just taken over from the American Red Cross in 1921. Initially they made their home in Chicago. Later they had a farm in Topeka, Indiana, where Arthur died as a result of a farm tragedy in 1943. Vesta died in Meadows, Illinois in 1973.

A large group, mostly women and children, in front of a building in Gulaipol (Nikolaipol?), labelled as the AMR kitchen - one of the worst districts.